A Motley Collection of Photos

Back in the spring, I took some pictures of a tree stump covered with vines; it's on one of my walking routes and I knew it would look very different come summer.

And here it is now:


It was impossible to get a clear shot because the vine wasn't the only thing that leafed out during the summer - that tree in front of it did, too. And the house in behind doesn't look the same at all, due to the different angle from which the picture was taken.

Maybe I should have spray-painted a big "X" where I stood for the first picture, so I'd know where to stand for the second one.

And on another topic, not long ago I was able to catch a crow in the act of washing his food, a habit I didn't realize crows indulged in until I read up on it:


Fall is on its way, here. The leaves are changing colour.

Some are prettier than others, but they're all interesting to me. 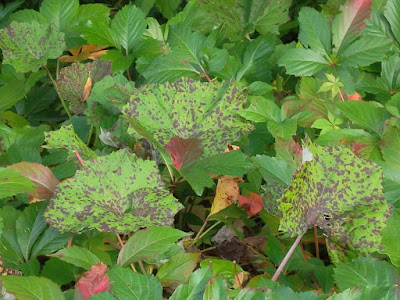 And to wrap things up, this fellow came out of nowhere - he was very photogenic and extremely friendly and I was afraid he was going to follow me home. That's how we ended up with the last cat we got, but the inn is now full. Luckily, he looked well cared for, he was wearing a flea collar, and he was clearly not feral - too lovey by far. After a good pat, he was content to let me leave without following.


Hope all is well in your world.

Posted by jenny_o at 04:47:00
Email ThisBlogThis!Share to TwitterShare to FacebookShare to Pinterest

That's how I got all of the cats I had, they just sort of showed up and were like "I'm here, when's dinner?"

Beautiful snippets from your world. We have had cats move in with us too. I am not certain the current pair would agree. And yes, I stop to pat moggies on my walks. Always.

Ha ha! Most of them have very good self-esteem, don't they?

I love the term "moggies" - it's not used here but it should be!

That is a great idea for a stump. Crows and ravens are very smart birds. He was probably dunking it to get the grease out or add flavor to it. He had a reason you can be sure.

Wow-it's amazing how different the house behind the tree looks! I love that cat-he looks very satisfied with life.

I know - it doesn't even look like the same place. It's a fairly large home, built in several sections, and in one shot I've got one end of it and in the other shot, the other end. It's the same stump, though, I promise :)

Jenny, I would never doubt your photojournalistic integrity. I can't stop looking at the cat picture, though. That cat is so self confident. He should write a self -help book.

Haha! And that kitty was much less squinty-eyed in person (in cat?). He was so affectionate. Maybe you could ghost-write his book, Chicken!

That IS an impressive vine. Looks like English ivy, which will take over if permitted! I've heard of raccoons washing their food, but not crows! Who knew?!

Compared to some fast food - yes.

I've heard ivy will take over. Certainly looks like the case here :)

Welcome, gz! Nice to have you here.

I see you've read "Water For Elephants" by Sara Gruen. I loved that book!

Yes, I just finished it. Wasn't it good!