Time flies when you're having fun, so they say.

"They" are wrong. I haven't been having fun at all, but, despite that, some of my precious remaining time as a living, functioning person has disappeared anyhow.

I'm trying to meet work deadlines.  One of the offices where I have to work in person has no air conditioning and the weather has gotten hot here, so I have to go at times I wouldn't otherwise be even awake. Then I come home and sleep during the day. Crikey. At least that job will end in a couple of weeks.

I'm stressed by my mother's problems, and have been to see my own doctor about my blood pressure and other issues. He recommended grief counselling, which I think is actually a pretty good idea because I think I'm kind of stuck, but then the conversation veered away from how to handle the stress I'm feeling and we never did get back to it.

My mother is declining further, cognitively speaking. She is mixing up her pills and I'm finding them in her clothing, in her purse, in the cushions of her chair, on the floor, etc. The pharmacy has blister-packed them but that doesn't stop her, it only slows her down. I've had to take the medications home with me, which therefore requires me to bring her pills to her every day. She is still talking seriously about getting a new car, and her geriatric assessment has been postponed by over a week. She feels she is doing very well and still has all her wits about her, quote/unquote. I do not feel that, at all, at all.

I was hanging on by my fingernails before; now I am basically doing the mid-air, leg-cycling thing that happens in the cartoons where someone runs off a cliff and keeps running until they realize there's no ground under them anymore. I haven't started the rapid downwards whoosh yet, but I feel it's only a matter of time.

I've been watching some YouTube videos on dealing with dementia as a caregiver, and that has been a little bit helpful. I've also developed some of my own methods of dealing with Mom. Number 1 is that if logic is not working, hey, guess what, more logic won't work either; it just sends my blood pressure through the roof. Number 2 is that I can't wrestle her to the ground and make her take her pills, and I can't hide them in her food like I do for our cat, so taking her meds has to be her choice and I have to let go of trying to control that. If she ends up with health problems from not taking meds, that's a risk I have to be willing to live with.

If any of you have any other tips, I'm all ears.

Moving on to lighter topics, I made an impulse buy last week. It was out of character for me to impulse-buy, but sometimes you just have to go with your inner voice. My inner voice was telling me this was the mug for me. For the record, I've only ever bought one other mug for myself in my whole life, and I don't drink coffee or tea or hot chocolate, and I don't like to drink cold beverages from a mug, so I'll probably use it to hold pens.

(If Laurie or anyone else with vision issues is reading, the mug says: I got so much procrastinating done today. I think this describes most of my days) 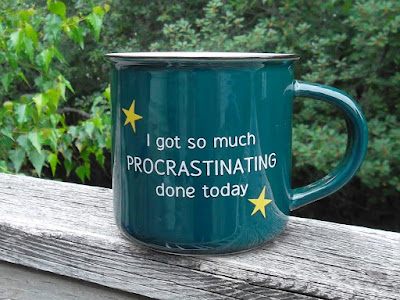 Last week these fawns were snoozing in my back yard. I've noticed that when there are two or more deer resting at the same time, they position themselves back to back. Smart deer! And they seem to learn this at a young age. 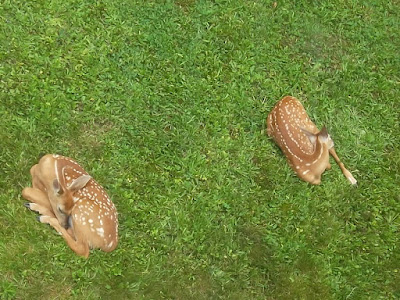 And this buck was resting by himself, on a different day. His antlers are growing. He was very laid back and his eyes were drifting shut repeatedly. 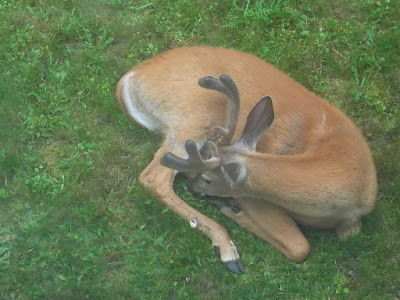 A couple of posts ago (here), I included a picture of one of our cats, Meredith.

Blogger Bonnie, from It Seems Like Only Yesterday, herself the servant of two beautiful cats, asked for a picture of our other cat, Lucy.

This week, Lucy deigned to pose for me.

No, she didn't. I took the picture without permission and she will likely sue me for it. That's just the kind of girl she is. But she has lovely eyes, doesn't she? And a delightful little pink nose. Which is right above her cobra-like fangs. But we won't ruin the mood with that little detail. 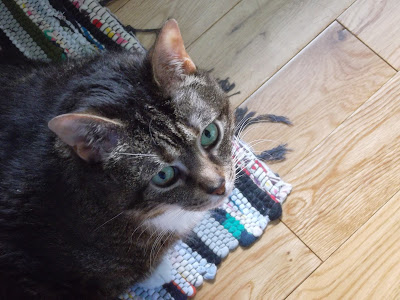 I've been doing a miniscule amount of gardening, as I usually do in mid-July, when the transplants I bought in early June are on their last legs and I have to get them into bigger pots or into the ground before they die.

Here is Frog with his gardening tools and little plant. This is a difficult planter to work with because the place where the earth goes is so small and oddly shaped, and the earth dries out so fast, but this little succulent is what I found to fit in it this year. 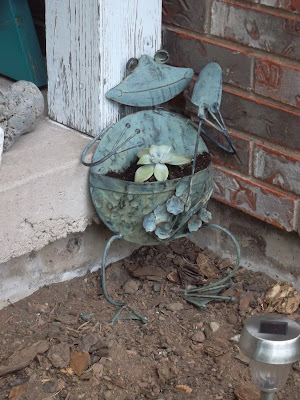 I rescued some transplants from the clutches of the earwigs and stuck them in a pot that's nicer than the actual plants are. 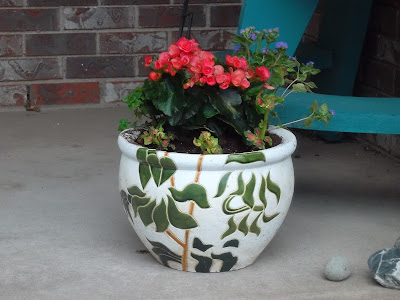 Lastly, a chalk drawing of "V for Victory" fingers a peace sign (thanks, Janie Junebug!) I came across recently. Hardly anyone draws on the sidewalks here and this doesn't really look like a child's drawing, so I'm curious who did it. 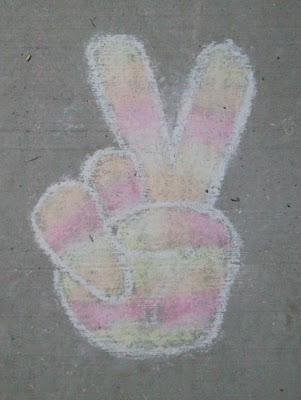 We can't finish without a funny, right? (In case the caption doesn't get translated into sound for those with vision loss, it shows a take-out mug with "cark" written on it, and the comment, "I said my name was Marc with a "c" ...) 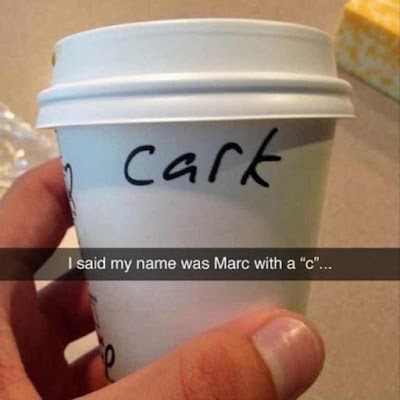 This is not my name (just to be clear) but it made me wonder: Have you ever had your name misspelled when you've ordered take-out? Or do you even give them your real name? I remember someone telling us years ago that they never gave their real name in a take-out pizza place because so many people in our area have the same last name (hint: Scottish settlers make for a lot of MacDonald's still living here).

I hope you're having a good week, my friends. If time is flying past you, I hope it's because you truly are having fun.

Posted by jenny_o at 00:31:00 57 comments:
Email ThisBlogThis!Share to TwitterShare to FacebookShare to Pinterest

One of the things I have been learning about grief is that it does not follow a neat path to recovery.

I'd read about that, and thought it made sense, but I hadn't really understood it. I still thought I'd progress in a relatively orderly way from feeling terrible to feeling like I was ready to live again.

Instead, it's been a meandering path, sometimes forging ahead, sometimes looping back to find myself repeating part of the path over and over, sometimes returning to the early days of numbness and disbelief, or the later days of feeling physically weighed down with sadness and emptiness.

Some days I feel like writing here of normal things, and just as quickly I am back under a cloud again.

I guess what I'm trying to say is that I don't think there will ever be a good time to start posting again, because my mood is so variable. So I'm just going to post anyway, with the hope that you will understand if my writing goes back and forth between okay and not okay.

My husband and I did a lot of jigsaw puzzles in 2020 after everything shut down because of Covid. It was a comforting distraction from the world's problems in general and our problems in particular.

Usually the process started with him doing the outside frame, then both of us doing segments of the interior, until we were completely done. I'd then take a photo of the finished puzzle, break it up into the box, wipe down the table, and set out a new puzzle for him to start. As my husband became more and more ill, he was less and less able to concentrate on anything for long. He had a lot of back pain which was caused - although we didn't know it at the time - from a metastasized tumour in his liver which was pressing on a nerve in his back. Still, between us we managed to finish a large stack of puzzles.

The last one we did started out the same. My husband picked out the pieces of the frame and started to put them together. And then, just like that, he stopped. I finished the rest, hoping every day that he would be able to do a few pieces, but he couldn't. I was glad when it was done and broken down and put away. I still have two uncompleted puzzles in the closet and cannot bear to start them. I saw one at the store yesterday and thought, maybe - just maybe - a new puzzle wouldn't have the same emotions attached as the ones I chose when my husband was still alive. I picked it up. And was flooded by sadness and regret and all the other difficult feelings and had to set it back down.

Maybe some day. But not yet.

The reason I was in that store was to buy a sink plug. I had carefully measured the old plug and written it down in both inches and millimeters, because we are still using both systems in Canada and I wanted to be prepared for anything. I bought one with the same measurement and took it home. Imagine my dismay when the new plug was much larger than the old one. It turns out, for those of you who are as unknowledgable about these things as I am, that you have to measure the bottom of the plug, not the top. Why, people, why? Is life not already complicated enough that you cannot measure a simple plug in the most logical way and require only one trip to the store to replace it? (Note: I realize now that my idea of logical is obviously wrong. The bottom of the plug, not the top, goes in the sink drain. You don't want the width when you're looking down at the plug; you want the width you'd see if you were in the sink drain and were looking up. Of course.)

The day I bought the plug, the cashier had to swipe it on a machine to deactivate the anti-theft mechanism in the package. Which didn't work - it still beeped as I went out through the anti-theft gates - but she waved me on my way. Who steals a $1.99 sink plug? It must be an actual issue for the store if they've gone to that much trouble to thwart all the plug-thieves out there. I just hope when I take this one back that it doesn't beep when I'm going in to return it. I should probably just put it in the donation box but now I kind of wonder what will happen.

I am back to collecting lolcat pictures, so I will leave you with a few that I hope are new to you. 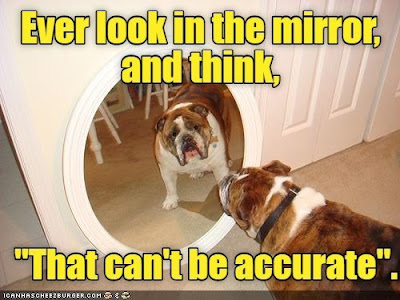 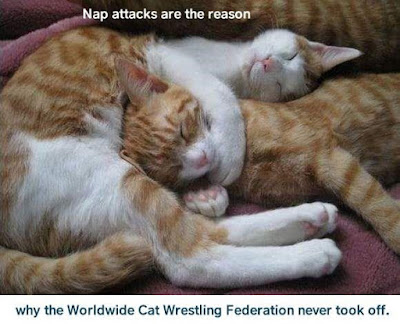 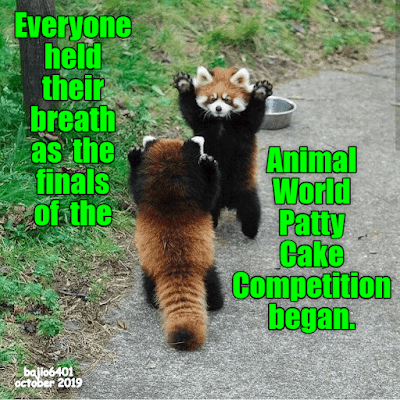 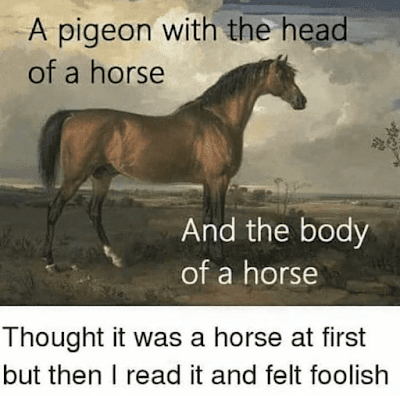 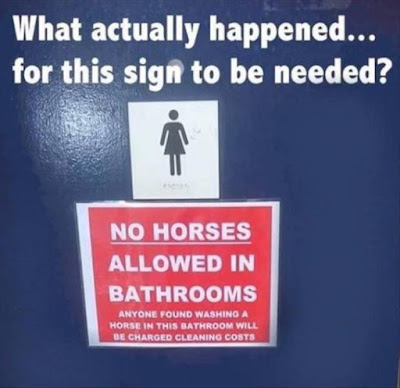 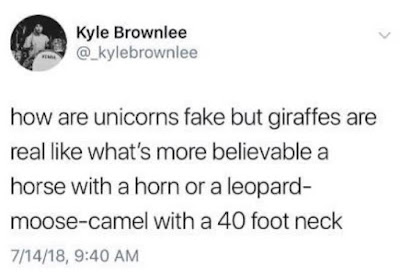 Have a good week if at all possible, and tell me ... have you ever bought the wrong size sink plug using the same reasoning I did???