It's Poetry Monday, and this week's topic is "hair".

Join Delores and me as we comb through our minds, brush up on our skills, and present our "hair" poems for the world's enjoyment :)

There's so much can be said about hair.

And a lot of it has already been said in the title song from the musical Hair (which then became a huge hit for  The Cowsills):

So what is there possibly left to say about hair?

I've written before about my own hair and my struggle to find a hairstylist who can cut it to my liking. Those posts are here and here.

Things have improved somewhat on the haircut front, and I hate to rock the boat for fear of making them worse again, so I'm pretty much just getting the same cut over and over, and trying to be thankful I have hair at all, because I don't have the face to successfully shave my head. Also, I am very, very grateful that my life is so easy that a haircut is the hardest choice I have to make.

Half-Resigned To My Awful Fate

Do I care
If my hair
Is not quite
What I like?

Do I swear
Do I glare
Do I flare
Oh BEWARE

Over to you, Delores, for a new topic, which I will post when it has been finalized.

Wishing you a good week, everyone.

Posted by jenny_o at 00:00:00 48 comments:
Email ThisBlogThis!Share to TwitterShare to FacebookShare to Pinterest

It's Poetry Monday and this week's topic, courtesy of Delores, is WINTER WINDOWS.

Join us as we squint through those windows and see what we can see . . .

Winter Windows, eh? I knew this would be a challenge (for me) when Delores suggested it last week.

Let me just get my trusty hunting cats and my explorer scarf and my magnifying glass and see what thoughts I can scare out of the underbrush in my brain . . .

Here's what I found on my hunting trip.

Although February used to be quite a snowy month where I live, the last few years have been very "open" (not much snow cover). This year follows that trend. We have had quite a few snowstorms, but in between those the snow has either melted or been washed away by rain.

One thing that I like about snow on the ground is how it makes the days (and nights) look brighter, because it reflects the light. When there is no snow, the landscape looks drab and colourless.

So, instead of seeing snow and ice out my winter windows, I'm seeing . . .

Through this February glass
All I see is dead, brown grass
Leafless trees, expired flowers
How I long for April showers


Have a good week, everyone!

Posted by jenny_o at 00:00:00 37 comments:
Email ThisBlogThis!Share to TwitterShare to FacebookShare to Pinterest

It's Poetry Monday, and this week's topic is "driving" . . . Join Delores and me as we take this topic out for a spin! You can leave a poem in the comments on either of our blogs, or on your own. If you do the latter, be sure to leave a comment so we can come along and enjoy your contribution.

As you might have guessed from my accidental posting earlier, which I was only attempting to rename so I could start this one instead, but failed, I was going to write about all the driving I did during December and January to our daughter's house, which our son is now renting, which we were helping to prepare for rental, which is a three-and-a-half-hour round trip away from us; driving that took me through rain, snow flurries, snow squalls, heavy snow, unplowed roads, and unsalted roads, and always the trip home was after dark, so there was that complication, too.

And then I realized, there really wasn't anything to write about, much less write a good poem about. I drove. I ran into weather. I got home unscathed. I did it numerous times. I'm still alive.

It always faintly surprises me -- but definitely makes me happy -- when I do that drive and I get home alive. I feel like someday that will not happen. It's mostly highway, and I'm fine with that, but I don't like the merging into traffic and I really, really don't like when traffic is merging with me. Add in the bad weather and it gets my blood pressure up a bit.

However, it's not at all exciting or interesting except in the way that I keep having a sense of impending doom and it keeps turning out okay.

So at the last minute I decided I had to write about "driving" in some other way.

I love this icanhas.cheezburger.com meme, so I started with that:

But that didn't loosen up my poem-writing brain cells a bit, so I decided just to post all the memes in my files about animals driving vehicles. Don't worry, there's a poem at the end, kinda. 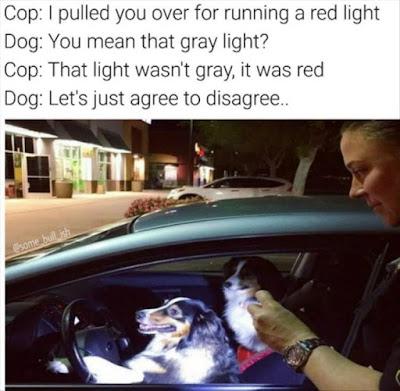 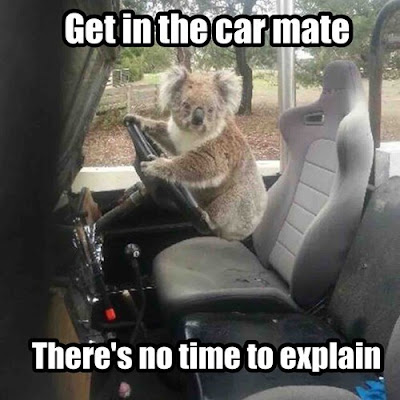 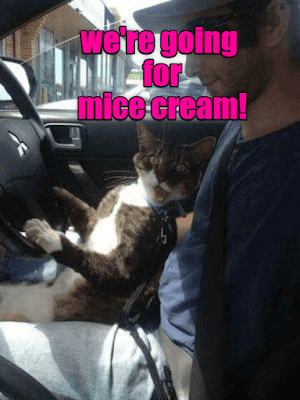 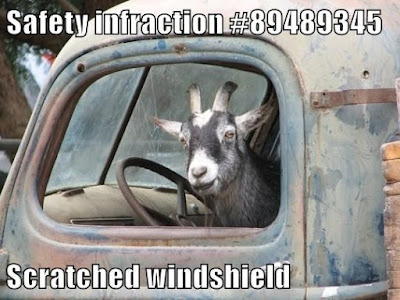 And the poem? It's a re-working of an old verse my friends and I used to write in each other's autograph books back in junior high school (do you remember autograph books?) and the original went like this (insert name of friend where I have put Jenny):

It doesn't seem so funny now, after decades of driving -- and decades of reading about road fatalities in the newspapers -- but at the time we thought it was hilarious.

Anyhow, my poem today is prompted by a story my long-haul trucker uncle told us a few years back. He and another trucker were driving one behind the other on a stretch of highway, and his buddy told him to look out for a particular colour and make of car that had just passed him and was approaching my uncle's truck to pass him. The buddy said to take a good look at the woman driving the car.

So my uncle did. And what did he see? The woman was nursing a baby, drinking a can of pop, smoking a cigarette, and talking on her cell phone. While passing tractor-trailers on the highway.

Phew! Makes you wonder how long she lived to keep doing that . . .

Time for the new version.

Then came a day she thumbed her nose
At rules one time too many
What happened then in Missy's life?
Why, Missy hadn't any

Whoa, that took a dark turn. But also a realistic one. I just hope Missy didn't take anyone else out with her when she went for her final drive . . .

Please have a good week and drive safely! And especially watch out for the Missys of the world. So you can come back next week and see what Delores and I are up to :)


Update:  Delores has come up with next week's topic:  WINTER WINDOWS . . . thank you, Delores!


Posted by jenny_o at 01:00:00 40 comments:
Email ThisBlogThis!Share to TwitterShare to FacebookShare to Pinterest

Once again, it's Poetry Monday, and time for some culture round these parts.

Anyhow, the topic this week, provided by Delores in Diane's continuing absence, is SOUP. Feel free to leave a poem in the comments on either of our blogs, or on your own blog (and if you do that, please leave a comment to let us know how to find you and cheer  you on).

Soup. Bloop. Goop. Why do the words that rhyme with soup sound so bad?

It shouldn't be like that, because soup is GOOD. It tastes good and it's good for you. In the winter hot soup warms us up, and in the summer cold soup cools us down.

You have to be careful, though. If you put too much stuff in soup, or make the broth too thick, then what you've got is -- well, that's in my poem.

I should warn you that I took a few liberties with words here. If you care deeply about everything related to writing being correct and proper, look away now.

Begin with a liquid, like water or broth
Cut up some veggies and add to the pot(h)
Put in some meat if you want to - or not(h)
Simmer 'til tender and soup's what you've got(h)

Eat on its own, or eat with some bread
If bread's not avail., then use crackers instead
If someone has eaten the crackers (hmm, Fred*?)
Throw in some croutons and eat soup in bed.

In winter make sure soup's unbearably hot
In summer make sure that hot is what it's not
(And one way to do this - it's only a thought -
Is making soup popsicles! . . . er . . . maybe not?)

Whatever the temp. is, I must caution you
When it comes to ingreds., you must use just a few
For if it's too thick, that will simply not do
If you're using a fork, it's not soup -- it is stew!


If you're wondering whether today's title Soup Rules means "rules for making soup" or if it means "soup is awesome", the answer is Yes.

Wishing you a good week, with good food (whether hot, cold, or lukewarm) and well-behaved pets (whether feathered, furred, finned, or bare nekkid) . . .


NOTE TO DELORES:  Want to tackle DRIVING next week?