I thought this would be a short post today, using a few pictures that have been hanging around in my files since May.

As my mother always used to tell us, You know what THOUGHT did ...

First I found that half of the pictures I wanted to use didn't show up very well in the small format I need to use here. So I was inserting pictures, and deleting pictures, over and over.

Then I thought something was wrong with Blogger because suddenly none of the pictures, good OR bad, could be inserted into the body of the post.

Then I thought the internet connection was dropping, which is a common thing here because we have a wireless router and the signal is a bit sketchy.

Then I did the only other thing I know how to do, which is click on "Troubleshooting" for the internet connection. And it told me our modem was having problems connecting. I was advised to turn it off, wait for all the lights on it to go out, and then turn it back on.

At this point I should just tell you all upfront that my husband always does this stuff when it's necessary. But he wasn't available to do it just then. He is an early riser, and also an early retirer. I wasn't about to waken him to fix the modem so I could write a post.

So down I went to the basement where the modem is located, and tried to turn it off. There was no on/off switch. So I turned off the first of two power bars that looked like it might be the right one. I know I should have followed the cords to see if it was really the right one, but there were an awful lot of cords and I'm not really that patient. Nothing happened. So then I turned off the furthest power bar. Nothing happened. Then I unplugged everything I could see from the wall outlet. Nothing bloody happened! It was like a zombie modem; it wouldn't die.

So I got the broom and started sweeping the cat hair up because at least that was something I knew how to do. I was getting a little rattled at this point, and physical work helps me calm down.

After I finished sweeping, I plugged everything back in, and turned off the furthest power bar again. Suddenly all the lights went out on the modem and the router, and something started beeping. What??!! How can anything be beeping when the lights are out??

Cripes. I counted eight beeps, and then ... nothing.

So then I turned the power bar back on AND VOILA ALL THE LIGHTS CAME BACK ON AND EVERYTHING WORKED.

Speaking of mushrooms ... time to update you on my latest haircut. Fun, right? Here's me when I saw the back of my head in the mirror at the end of yesterday's appointment: 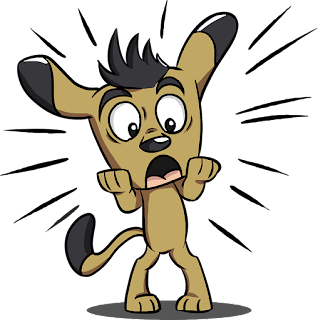 My poor hairdresser. She had worked from a picture I brought with me. I kept telling her the picture was just for the silhouette (i.e., flat, not mushroom-shaped!!) but ... it ended up quite short in the back. Not as short as I had it once about ten years ago (that one was next thing to a buzz cut) but too short for my liking. And the front was long; so long I felt like this:


Anyway, she took me back for a second try today (at the end of her long day, bless her), and at least the front of it matches the back now. Oh yes that's right people, more hair is on the floor at the salon and less is on my head.

It will be easier to take care of, though. So there's that.

I'm not sure what the next move is in this chess game, but I have five weeks to think about it. I really appreciate her ability to give me a precision cut, something that's difficult to do with my fine, heavy hair. So I want to keep trying to work this out. Heavens to Betsy; it's almost like marriage. Stay tuned! There will likely be more instalments in this harrowing saga. Harrowing. Get it? Hair-owing? ... Never mind. 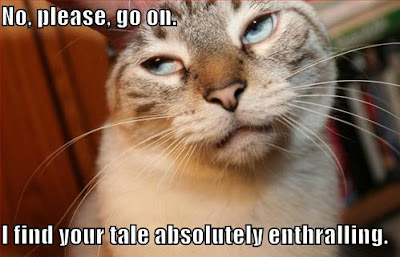 Wishing you all a week-end without hairy situations :) And hopefully with a minimum of long-winded people ...

Posted by jenny_o at 02:00:00
Email ThisBlogThis!Share to TwitterShare to FacebookShare to Pinterest

Love your Frothy Fluffy Tree.
Those who name plants (and often birds) have no soul and no imagination.
Sigh on the hair front. I am wearing a shocker at the moment too. It will grow, which is the only point in its favour.
Love your clouds and your sunset too.
Have a wonderful weekend.

PS: Congratulations on your techno-wizardry. And less cat hair on the floor at the same time.

Hair cuts are more often like a lucky dip, you never know what you will get.
That's a white lilac with the steeple in the background.

Isn't it a good feeling when you accomplish something technical, especially when you have no idea what you are doing.

When I leave the hairdresser, I rush home to redo her do. I am never happy with the comb-out, but as long as the cut is OK, I continue to hand over my money and not say a word.

When it comes to modems and the internet I've been reduced to pulling my hair out at times.....there just HAS to be a better way. Love that kitty shot.

Our hair may come out OK at the very same time.

Beautiful photos! I hope your hair grows into the style you envisioned.

Okay it ended up being a long post but I learned something. You don't have to swear at the computer to fix it.

But at least you solved the mushroom problem, right? Temporarily?

We have to restart our router all the time. It's super annoying.

Beautiful pictures. Computer problems are a drag, glad you sorted yours out. Sometimes when I get frustrated, I have to stop and do something simple, just to sort of make myself remember what the cycle of accomplishment feels like. Sometimes it helps, sometimes it doesn't, but it always reminds me that yelling and throwing things, while sometimes an inviting option, doesn't really help anything.

Best of luck with the hair. Mine has a will all its own. Lovely photos.

Sometimes I dream about being able to "lock in" a hairstyle like locking in an interest rate on a loan - when you get one you like, it stays that way until forever. On the other hand, it would be bad to get locked into one you didn't like. Sigh. Come sit with me, EC, and we'll be the Shocking-Haircut, Excellent Plant-Naming Ladies together.

I was quite pleased to have done two things at once :)

So true! And I'll check out white lilac to see if the blossoms match. The elongated blossom masses are similar but I'm not sure about the little individual flowers that they're made up of. Thanks for suggesting that.

I'm glad you said that, about redoing her do. I have always done that and feel like a very fussy person. Good to know I'm not alone!

It's almost as if someone said, how can we take the internet, this wonderful communication tool, and make it WORSE??

And if I get much more taken off, we will be twins :)

Is that a thing? Can that happen? Don't get my hopes up, Angella! hah

I never said I didn't swear at it too :)

Maybe you need a new router. Do routers wear out? Modems wear out, I'm pretty sure. I haven't a clue; don't pay any attention.

No, it doesn't, and there's research to say that acting out those feelings actually increases them. (Which goes against what people are often advised to do, eg. hit a pillow.) I've found distraction to be more effective, at least most of the time, similar to your method.

Have you made any headway toward starting up a blog, Doug? Don't forget to let me know if you do!

Probably all hair has a will of its own :) Seriously, I never disliked my hair when it was long. It wasn't until I got to an age where long hair just didn't look good that the problems started. And I don't like short hair on me either. I'm screwed, Liz :)

What you need is a short style that looks like it already grew out for two months.

River: exactly! I should describe it that way to my hairdresser.

Zombie modem...hahaha! We laugh but the machines may be taking over as I type this.

And the hair tale had me laughing out loud, although I was very sympathetic and even empathetic at the same time. Just so you know I'm not insensitive and stuff like that there. Because it is so hard to find a hairdresser that gets it just right. It's like a miracle, really.

I'm still not liking my hair :) Waiting for a miracle, Martha!!

Growing as we speak :)

Your post today is very moving. I'm just getting caught up today; last week was busier than usual and I was falling behind.

Oh, no - your poor hair! I feel for you. There's nothing worse than wincing every time you look in the mirror. Hope you're happier with the cut after she fixed it!

Happier, with emphasis on the "-ier" ... still not happy, but it will grow. *grinds teeth loudly* Instead of a mushroom, now I look like a pin-head!!!

Oh dear ,i think you are being so sensitive about hair ,
this crop will grow again ,don't worry :)

mine are falling like autumn leaves since i lost my parents
this is scary but nothing in my hand so taking a chil pill :(

all is well when end is well

finally you won the battle against technology lol

Hugs!
and yes work or being busy keeps me better too

Your hair is beautiful, baili - I hope it was just stress causing it to fall out and that it stops soon. You're right, we can't do anything about it so we might as well chill :)