It's Poetry Monday, and this week's topic is .....WINDOWS.

Join Diane, MotherOwl, Mimi, Merry Mae, and me, as we put a shine on this topic. You can leave your poem in the comments, or post on your own blog. If you do the latter, please leave a comment so we can find you and your poem. Use the topic, or choose another; the objective is to have fun and work our brains :)


Can you believe I struggled for days to produce four lines of "kinda" poetry about windows? I had ideas, but, people, nothing worked until I followed the line of thinking that had been in the back of my mind but which I had been trying to avoid the whole time . . .

I Don't (Often) Do Windows

Invisible when they're freshly washed;
Less so, with some screening.
Windows let us see the world, but --
I wish they didn't need cleaning

I hope you have a better relationship with your windows than I do, and -- at least this week -- you don't have to wash any :)

Posted by jenny_o at 03:00:00 52 comments:
Email ThisBlogThis!Share to TwitterShare to FacebookShare to Pinterest

Join Diane, MotherOwl, Mimi, Merry Mae and me as we give a tip of o(u)r hats -- or not -- to those folks who share our lives by occupying a space close by us -- at work, at home, or by geographical accident. Good neighbours or bad, let's let it all out :)

You can leave your poem in the comments or post on your own blog; if you do the latter, please leave a comment so we can find you and your excellent offering. Use the topic, or choose another. The objective is to have fun and give your mind a workout.

We are lucky to have excellent neighbours at the moment -- kind, considerate, friendly, and supportive, yet still allowing everyone to have their private space, given our comparatively small house lots in this town.

But my poem today isn't about those neighbours.

The folks in houses round us
Are top-notch. No complaints.
They have our backs; they are our friends;
They're close to being saints.

But the beasts who range the closest
Are a different sort, all right.
They use our yard as bed and bath;
Munch everything in sight.

They flaunt their coats of fur!
(How unethical can you get!)
And as for paying monthly rent?
Well -- not one penny yet.

They even had their babies
Along the property line,
And brought them back for naps and snacks,
Time after time after time.

If they were human neighbours,
There would be heck to pay.
But since they're white-tailed deer, you know,
It's fine! They're A-okay :)

Some photos from last summer, of the neighbours in question, follow.

I wish I could have gotten a picture of the two wobbly fawns that we think were born in the back yard tree line (the second year in a row!) but I didn't dare disturb them. But as the fawns grew, it was easier to get pictures because they were no longer hiding in the bushes. There were two mothers who visited regularly with their babies (one mother had one fawn, the other had two), and there were an additional mom and fawn that occasionally joined the rest.

These shots are not clear, but they'll give you an idea of what we were seeing all summer.

The video was taken early in the summer.


And one final shot, from our front verandah. This is the twins' mama, with one of the fawns. This mom was very thin all summer. You can see her ribs in the photo. Feeding two babies is tough on the mother. I hope all of them survive the winter.

And here's a casualty of the grazing habits of our "neighbours". This used to be a beautiful geranium but in its first peak flowering, one morning all of the blooms were gone. There was a muddy hoofprint on the verandah that identified the culprit!

I hope the upcoming week brings you lots of magic and not much (if any) exasperation :)

Posted by jenny_o at 03:00:00 52 comments:
Email ThisBlogThis!Share to TwitterShare to FacebookShare to Pinterest

Twelve seconds of joy, and the best part in my opinion is at the ten-second mark!

In other news, have you caught on to the fact that I've figured out how to link to videos in Twitter feeds????

Posted by jenny_o at 14:07:00 34 comments:
Email ThisBlogThis!Share to TwitterShare to FacebookShare to Pinterest

. . . have a peek at something to hopefully brighten your day 😄

Join Diane (who provided the topic), MotherOwl, Mimi, Merry Mae and me as we polish our thoughts on glasses of any kind, whether the ones you wear or the ones from which you drink. You can leave your poem in the comments or post on your own blog; if you do the latter, please leave a comment so we can track you down. Use the topic, or choose another; the objective is to have fun and work our brains :)

I've worn glasses since I was eight years old.

Those glasses came in the iconic frames from each decade: cat's-eye in the sixties, wire granny glasses in the seventies, the huge window panes and heavy frames of the eighties, the wire frames (again) in the nineties, the half-rimless specs and the very small lenses of the first decade of the new century, which -- may I say -- were the absolute worst, even worse than cat's eye frames, because it was like looking through a peephole, fer cryin' out loud.

Currently I am wearing super-light frames made from a strong and flexible metal that I'm awfully glad I chose when I had the chance, because I recently stepped on them and they didn't even get bent, let alone break.

Let me pause here to painfully remember how many times I broke either the bridge or the earpiece of plastic frames when I was a kid, and wore taped-up glasses to school for weeks while waiting for a replacement. Any of you who wore the same kind of frames in the same time period of your life probably know what I'm talking about.

Over the years, my lenses have gone from coke-bottle-thick to ultra-thin due to industry improvements and also due to my cataract surgery that installed partially-corrective artificial lenses in my peepers, allowing me -- for the first time since I was that eight-year-old child -- to get up in the morning without needing to slap on my spectacles first.

But recently I have wished with all my heart for a new kind of glasses -- the kind that would help me see into other people's wounded hearts and minds, and make me a kinder, more understanding person.

Especially with my mom. She is suffering cognitive decline, which includes both memory loss and impaired logical thinking. She will ask me the same questions over and over, some of them intrusive and overbearing and some of them just annoying. Most of the time I just give the same answers over and over, but sometimes, for whatever reason -- if I'm feeling unwell, or tired, or in a time crunch, or just because I want my old mom back -- I will hotly point out that she's asked that same exact question several times already. Then her mask of self-sufficiency slips, she laughs vaguely and says, yes, you are right, and I feel like a monster for saying aloud what her faulty memory is allowing her to forget.

This week's poem is about the vision I need at this stage in my life as a daughter.

In Which I Also Make Excuses, And Feel Guilty

Her eyes, once so sharp, once so clear and so blue
Are watery now, and a hazier hue.
She searches for words and forgets people's names,
And tells the same stories again and again.

I tell myself patience I'd easier find
If only she'd listen to my keener mind,
If only she'd do what I've planned she should do,
If only her stubbornness she would subdue . . .

But she's always been feisty, relied on herself,
Used her own brain, made her choices on health.
And even though now her thought processes fail
She doesn't want help and her word must prevail.

And so I am set off by trivial things,
And fail to allow for the changes age brings:
The lapses in memory, and constant repeats --
The deficits youthful minds scorn and defeat.

I wish I could see the pathways in Mom's brain:
The damage . . . short-circuits . . . cells circling the drain.
But insight's elusive . . . flawed vision, you know . . .
How I wish there were glasses to help make it so.


Have a good week, everyone.

Posted by jenny_o at 00:00:00 41 comments:
Email ThisBlogThis!Share to TwitterShare to FacebookShare to Pinterest

Join Diane, MotherOwl, Mimi, Merry Mae and me as we get down to busy-ness and create our masterpieces. You can leave your poem in the comments or post on your own blog and leave a comment here so we know where to find you. Use the topic, or choose another; the object is to have fun and make our heads think!

Last week was full of busy days for me. There was visiting, and being visited, and Halloween, and phone calls upon phone calls, and meetings, and all the usual stuff that a person has to do to keep a house running. I feel like I accomplished quite a bit, which was good, but it was a huge relief to make it to the oasis of the weekend, and then to check the calendar for next week and see nothing planned.

That's not to say I'll be doing nothing. We couldn't have our family Thanksgiving dinner back in October because my husband and I were recovering from colds and didn't want to risk giving our germs to our elderly mothers (or anyone else, for that matter). So our replacement Thanksgiving will be this Sunday, and that will involve some extra housecleaning this week. But other than that, it will be quiet here. There will be time to read and make Christmas ornaments for a second craft sale and go for some walks.

These were my thoughts when I was contemplating "busy days" for Poetry Monday.


No Offense But I'm Not Answering The Doorbell This Week

Days that are full have their own special charm:
Completing my Do list as long as my arm ...
Visiting special folks too long unseen ...
Getting through meetings or errands routine ...

But days that are quiet are what I live for;
No drama, no worry (both things I abhor).
Some think it is boring, but I disagree;
My life's not for them but it's perfect for me. 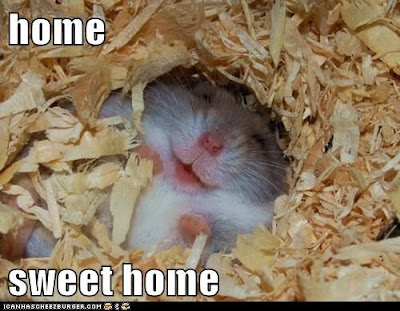 Wishing you a week that's just as busy or quiet as you like it :)