Join Delores, MotherOwl, and me as we peer into this topic and transport you to another realm with our portal poetry ... hopefully ...

You can leave a poem in the comments, or post on your own blog. If you do the latter, please leave a comment so we know how to find you and your poem. Feel free to use the given topic or any other topic of your choosing; the idea is to have fun and make our brains fire a little faster.

I was unsure how to approach this topic at first. While I enjoy science fiction, I haven't read anything about portals for a long, long time. Are there portals in the Harry Potter books? I don't read them, so I don't know. But Delores gave me a few tips over on her blog Mumblings, and that helped.

And then one day I was watching our cat Lulu play inside a large brown paper bag, and my path forward was suddenly clear.

Lulu doesn't consider what she does in that large brown paper bag to be "play". She's completely serious when she enters that portal, and uses all eighteen of her claws to attack whatever is on the other side.

(Just between you and me, the only thing in that bag when I looked inside was a piece of kitty litter, but I think human eyes and kitty eyes see things differently.)

in my kingdom
i rool benev  benoval
kindly
with velvet paw

Apologies to those whose mother tongue is not English; the kitty's spelling is not good. I hope it makes sense to you :)

Wishing you a peeceful week with zero monsters to battul.


Posted by jenny_o at 00:00:00 56 comments:
Email ThisBlogThis!Share to TwitterShare to FacebookShare to Pinterest

Close Encounters Of The Bird Kind

A few weeks ago, I went for my usual afternoon walk along the river near our home. I stopped at the lookoff, which is built high on the river bank.

This particular day I was facing the other way, looking out over the water. Right away a couple of chickadees flitted into view, and perched in the bare branches of the bushes that grow up close to the railing. One was looking directly at me, at eye level and only an arm's length away, still chattering -- and before I could  do any more than wish in vain that my camera was turned on, he had flown to me and landed on my head.

On my HEAD, people!!

Unsure of his intentions, and not wishing to have my head pecked at or pooped on, I carefully reached up and that was enough to make him fly off. I still don't know what he was after; maybe he wanted some hair or maybe I looked like a gigantic piece of bird seed. It was shocking and delightful all rolled into one.

Not long after that, I had a different kind encounter, this time at a strip mall, the kind where stores are accessed from outside rather than inside the building. I had bought a small bag of chips to ward off hunger pangs until I could finish my errands, and was walking along the sidewalk in front of the mall, headed for my car.

I'd already noticed a couple of seagulls flying around the parking lot, shrieking insanely, as gulls do, and I was feeling sorry for them having to scrounge food in that way and at the same time idly wondering how good their eyesight was. I'm not sure why, because it was very out of character for me to do something so poorly thought through, or to litter, but I decided to test their eyesight by dropping a chip beside the sidewalk, as if by accident, figuring they'd see it sooner or later and clean it up.

They saw it Sooner, and started shrieking even louder to alert all their buddies from the far side of the parking lot. They swooped down, far too close for comfort, and looked at me with their beady little eyes. I started walking faster, but I thought I'd better drop some more chips so they would stop following me and eat instead.

All that did was attract more gulls, so I dropped some more chips. By then I was almost to my car, and walking very fast for an old girl. I swear those gulls were still looking at me as I sat in my car, sneaking the three chips that were left in the bag (it was small, remember? really small). I tried to be completely invisible, not only to make the birds go away, but in case anyone was watching my stupidity.

Not my brightest idea, and not my finest moment. Let's call this encounter shocking and educational.

I certainly know for sure now that gulls have formidable eyesight.

Have you had any close enounters of the wild animal kind lately?

And did you ever see the movie Close Encounters of the Third Kind, which I ripped off adapted for the title of today's post?


Posted by jenny_o at 02:30:00 44 comments:
Email ThisBlogThis!Share to TwitterShare to FacebookShare to Pinterest

Join Delores, MotherOwl, and me as we bring our poems to you Special Delivery!

You can post your poem in the comments or on your blog; if you do the latter, please leave a comment so we know where to find you.

Use the topic, or not; the idea is to have fun and maybe give your brain a workout.

No matter the means of delivery--
Pony express or technology--
All of humanity feels a real thrill
When the mail brings a letter instead of a bill.

And some mail-related funnies from icanhas.cheezburger.com . . . . . . 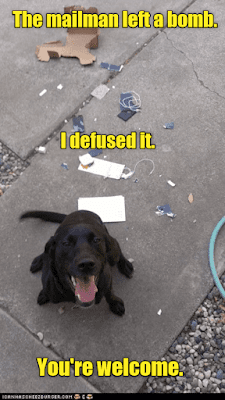 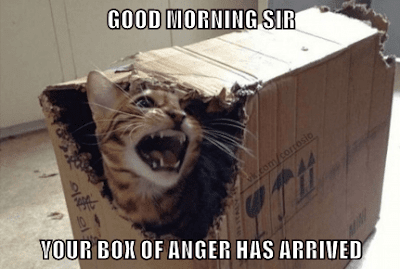 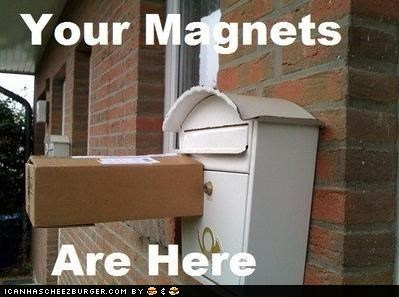 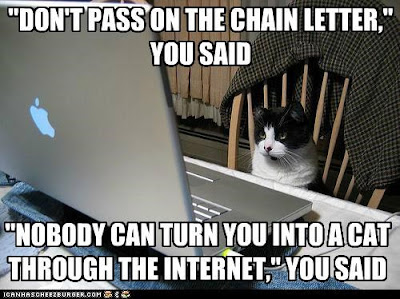 
Wishing you some good mail this week :)


Posted by jenny_o at 01:00:00 42 comments:
Email ThisBlogThis!Share to TwitterShare to FacebookShare to Pinterest

Join Delores, MotherOwl, and me as we delve into this topic. You can post a poem in the comments or on your own blog; if you do the latter, please leave a comment so we know where to find you. Use the topic or not -- it's all in fun and it's good exercise for the brain.

What's worse than turning out the light and climbing into bed after a long summer day and hearing ...... hmmmmmmmmmmmmmm ..... all around your face? You know you won't be getting any sleep until you (1) donate blood, or (2) kill the critter.

But in the dark, it's hard to know just where to aim. And when the droning stops, things just get worse. You know the flying hypodermic needle has landed and is about to pierce your skin. You wait for the tiny prickling sensation that tells you it has started to insert its pointy proboscis, and slap yourself silly.

Hoping you've landed a death blow, you settle down to sleep again.

It's either Lucky Lindy back again . . . or a half a dozen of her friends who've arrived for the funeral.

I say "Lucky Lindy" because, as we are often told, it's only the females who want to drink our blood. I personally have probably killed thousands of mosquitoes during my life and I bet half of them were innocent. But who can tell if a hovering mosquito is male or female?

Smack it! Smack it dead!

Oh, woe betide the soulless schmuck
Who kicks a dog or shoots a duck 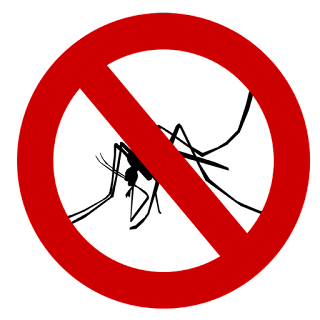 While searching for an appropriate mosquito-related picture, I came across some additional helpful information. 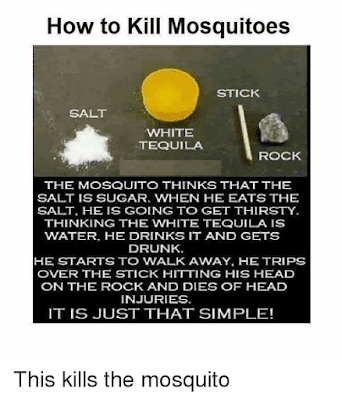 And this: (but be sure to read the punch line. We don't want a rash of spoon burns going around the internet.) 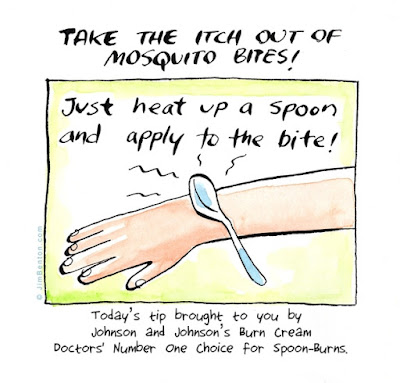 Wishing you a week free of things that bug you :)

Posted by jenny_o at 00:00:00 52 comments:
Email ThisBlogThis!Share to TwitterShare to FacebookShare to Pinterest

It's Poetry Monday, and this week's topic is . . . STITCHES.

Join Delores, MotherOwl, and me as we wrack our brains for something to write about this topic . . . or is that just me who had to root around in my brain like a kid looking for all the pieces to a small toy in a full-to-overflowing toy box??


There are so many kinds of stitches . . . sewing, knitting, crocheting, cross-stitch, crewel work, stitches that doctors use to sew us up, getting a stitch in your side if you run too long, being "in stitches" over something funny, and being without a stitch of clothing.

What to write about?

Having an interest in sewing (which you may have guessed from last week's post), I should be writing about sewing stitches.  Instead, I decided to talk about the dark side of sewing -- unpicking stitches. This is the most boring, frustrating, time-consuming, and apt-to-go-sideways part of a sewing job, in my opinion. I need to have a good rant about it, and now I have the perfect excuse :)

Why would a person ever want to unpick stitches? Well, if you make a mistake while sewing, or if you want to let out a seam or hem to make a piece of clothing bigger or longer, or if you want to take apart a garment in order to re-make or repair it, you're going to need to rip out the old stitching first.

Here's the tool you need when you're unpicking stitches:

And if you have carpal tunnel problems? Holding that tool makes your hand go numb in less than a minute, which isn't enough time to unpick one average seam.

Enough, enough! I can rant just as well in rhyme!

I sewed a seam so straight and true
But then those jeans did not fit you
. . . So I ripped it out.

I sewed two pockets to the butt
But then I saw I'd sewn them shut
. . . So I ripped them out.

I sewed the hems to their new length
They were too short -- Oh! give me strength!
. . . So I ripped them out.

The drudgery of sewing seams
Was lessened by machines, no doubt
But what I wish for now would be
An automatic ripper-out .......


*Apologies to Sesame Street's Grover and his book "Grover's Bad, Awful Day", which is the version of the story I'm familiar with, and also to Judith Voirst and her book "Alexander and the Terrible, Horrible, No Good, Very Bad Day" which I suspect inspired the Grover version . . .

Wishing you a week wherein you have more than a stitch of clothing to wear, you are in stitches at something funny in your life, and you avoid medical stitches.