The trees and shrubs are nearly at their peak of autumn glory here. They were just starting to turn colour when we were hit by the remnants of Hurricane Matthew on Thanksgiving Day. I thought the wind and heavy rain would blow away all the leaves, no matter what colour, but surprisingly they did not.

To balance out the winter/spring editions of Looking Up, here , here, and here, it's time to have a gander at glorious autumn:


Two more "up" pictures ("way up" might be more accurate): 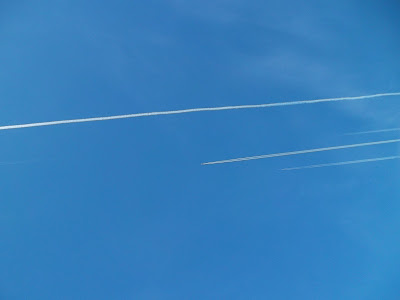 There is an airport a little further east of us on the planet, and it seemed all their planes were taking off during my walk. At least eight went overhead within a half hour, and there were other, older contrails in the sky as well. The jets were clearly visible at the leading tips of their contrails, although they don't show up in the shot above. 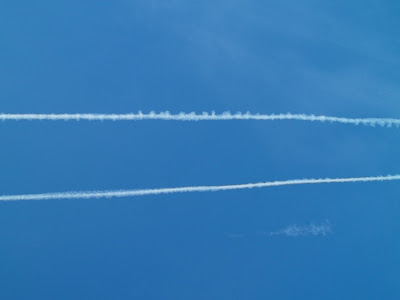 These photos don't translate to a small screen as well as I'd hoped they would. On the Big Screen, a.k.a. "the sky", they were marvellous.

It's been rather quiet in my world over the past week. I have been trying to get out walking, and it has been painful and frustrating. The pain has been worse in my back lately; it's been coming and going, so I suspect a nerve is being pinched, which calls for further investigation, which delights me no end. That might be a tiny bit of sarcasm there. But finding the beauty in nature - and in man's handiwork as well - has been a distraction and a comfort.

Sumac always looks so great in the fall. It's one of my favorite fall plants. And I remember seeing that bright pink/red one when I lived in New Jersey, but I can't remember what it's called. Overall, North America has a lot more autumn color than England, I think!

I admire that you get out and walk, even with the pain. Please investigate it tho. I hope it goes and goes.

We're just getting color coming on, too. I must go out with my camera tomorrow. Get that back check on and under control, or you'll only be walking a block at a time, like me.

Thank you for identifying sumac for me, Steve! I've never heard it named before. The pink/red shrub is called a burning bush in these parts (euonymus, I think).

When there's pain you have to wonder if the walking is helping or hurting. Don't be overly impressed; the pain you're experiencing is much different - bone on bone.

The back is starting to scare me, so I'll be taking care of it asap. I'm sorry to hear that yours is not improving.

Love the arboreal fireworks.
Echoing everyone else on the back front. Pain is no fun. And neither are medical investigations. Sadly a necessary evil.

Beautiful colors! In the song, Amelia, Joni Mitchell referred to vapor trails like this: "They were the hexagram of the heavens, they were the strings of my guitar."

I'm glad you're at least feeling better enough for occasional walks again. The wind and rain here has blown a lot of the leaves off of the peach tree, but the citrus and apple and pear trees still have all of their foliage. Hopefully the weather will hold today and I can walk this afternoon.

I like that. Never heard Amelia before - thanks for pointing me that direction.

"arboreal fireworks" - what a great way to describe the colours, EC. And I'm not a fan of tests, but there are worse ones than what I'm likely to need for this issue.

Aside from apple trees, I can't imagine having all kinds of fruit trees around. We don't have a long enough growing season for many of them. Hope you got your walk in!

"What IS this colour, anyway?" (Re. 4th photo): My 1st reaction was russet, but on further examination, settled at lovely.

I've gone looking at colour charts and STILL can't find anything more than red-orange to describe it, so thank you for giving it a sensible name, Geo :)

beautiful. Thanks for sharing. Karen

Thank you, Karen. Glad you enjoyed it.

Nature is so beautiful at this time of the year, isn't it? It's so lovely that you have captured it on film.

This fall has been especially nice, and I'm glad I've taken so many photos (many more than I post). They'll be a bright spot during our cold months :)