Which might explain some of the procrastinating that has been taking place on other jobs like housekeeping and Christmas preparation and even crafting.

There was a time when I always had my nose in a book. As a kid, I went to the library faithfully every Saturday when we went to town  to do errands, and always borrowed the limit of four (thick) books, which I finished long before the next week's visit. I remember my excitement when the limit was changed and I staggered out of the building with ten books weighing down my small self.

When I finished my education and was settled in a job in a new town, in short order I found and began to haunt the library there. Still later, after marriage and a family, I took our children to the library, too, and still managed to sneak in some books for myself, despite how little time I had to read.

Around the time that my father had his stroke in 2007, and things got extra busy for me, blogging was becoming popular. I had never found it easy to put down a good book until the last page was turned, so blogs were the perfect length for the short periods of time then available to me. Reading a full length book became a novelty.

As the busy years went by, I started to regard myself as a non-reader. In hindsight I understand that my focus had only shifted, from long stories to short ones, but it bothered me at the time that I no longer identified as an avid reader. I began to notice the extensive reading lists of some bloggers I admired (especially this one - thank you, EC), and tried to stir up my old passion for books.

It was hard at first. I had trouble concentrating on anything longer than a blog post. My brain seemed to have re-wired itself for short reading spurts only. As an aside, having seen this happen in myself, I believe it's probably even more of a problem for those who don't enjoy reading to begin with or aren't old enough to have developed the habit of reading lengthier material. If this could happen to me, a reader through and through, imagine how much easier it could happen to those who haven't developed the habit.

After persevering for a few months, I was able to read for longer and longer stretches of time without becoming restless, and my book-crazy self was reborn. When I began this blog seven months ago, I knew that keeping a list of books I read would be an important component, acting as both incentive and record.

Although we already have a huge number of books, I no longer borrow from the library. (Sorry, Librarian Steve!) The last few times I did, I kept forgetting to return them on time, and the embarrassment (and expense) together with the lack of selection pushed me to find an alternate source for my habit.

A local service group has an annual used-book sale, and although I've attended off and on through the years, it takes considerable time to sift through the chaff and find books I enjoy. This year the sale took place while I was in the midst of my hip/back problems, and because it was painful to walk or stand for extended periods of time, I ended up going for short outings on three different nights, which worked out well, and eventually ended up with forty books for a total of $50. It felt like I had found a buried treasure.  Since then, I have been wallowing in them, with at least two and sometimes more on the go at all times.

I don't know what I'll do for reading material after I've read them all, or just where we're going to put them, but for now I am happy to be a book person once more. I have my eye on a couple of local used book stores, and am trying to get a book exchange going at work (although that would require giving up my book babies, ha ha). We really need to figure out if we can weed our collection some more, but my husband will probably just build more bookshelves instead. 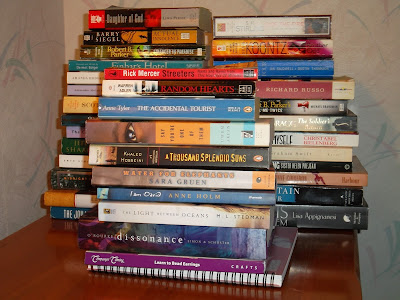 I know exactly what you mean-the same thing has happened to me. I think my kindle addiction is not helping. On-line is like a 24/7 used book sale and I'm constantly buying $1.99 e-bargains. The problem is, I start to read one. Then another, Then another. Then another. And pretty soon, I open up my kindle and start reading, having no idea which book I'm reading or how far in I am, or what the book is about. I wish a little book title and synopsis page would pop up everytime I open my kindle/e-book, to remind me of what I'm reading. Because when that happens, it makes me want to start over at the beginning. Of a new book.

I don't have an e-reader and hadn't thought about e-books - that would be such a temptation. A title and synopsis page would be a great help. Maybe you could make your fortune with that idea, Chicken!

Reading is probably the biggest (and bestest) gift my family gave me. I read every day. Good days, bad days, busy days. Not always (but often) a lot, but I read. I reread too. And the house is overstuffed and I am currently in the middle of a cull. And beating myself up because at the moment (for a variety of reasons) I am not stretching my reading enough. I read for education, for entertainment, for comfort. And at the moment comfort reading is the most common.

Yes; so many reasons to read. I don't like to think of you berating yourself for using reading for comfort. The times we need comfort are the times we most need to accept that aspect of reading. The other aspects will follow when our need is less. I am reading for entertainment and comfort right now. Wallow with me, EC :)

I mostly read online, but my living situation used to be sketchy enough that I would sometimes go through periods of no internet access. I am disabled. Without internet, I devour books. From May until early July of 2013 I read 35 books.
After the power was turned off last November, I'm not sure how many books I read before we made our escape in February, but it was probably over 100. And some of those I read twice, like Jenny Lawson's books and Daniel Quinn's.
I had to go through and cull some of them before this last move, about three milk crates worth, but then there are about two more (on shelves, not in crates) of recent acquisitions.
When I got a small inheritance last year, the book stores got the first chunk of it...

I find it hard to make time to sit down with a book these days. I think the Internet does hard-wire our brains to demand more rapid-fire stimula.

Looks like you are going to be busy for a little bit. We have taken the kids to the library for a few years now and it's nice to see that they have a love of reading. Enjoy your books.

Wow - that's a lot of reading. I think that the internet and the reading habit are definitely intertwined in a bit of a complex way.

I think some libraries are more awesome than others, though! Maybe I should check ours again sometime. Things may have changed.

I think one of the biggest gifts parents can give their kids is exposure to lots and lots of books and encouragement to read them. Being a good reader makes so many other life skills easier to master. I'm glad your kids love reading.

your own books are your old friends..how can one get rid of them!?

Yes, that's how it feels when you find a good book, isn't it!