Tiny Blue Flowers May Be Blue From The Cold

I promised several people in the comments on the last post that I would take a photo of the starflowers once they had opened.

People, when I went out to take that photo, the tiny quivering blossoms were still tightly shut, pulling their stalks around them as best they could, asking each other where the hot water bottle was, and wishing they had stayed in the ground a month longer.

All except for a trio of renegades ... 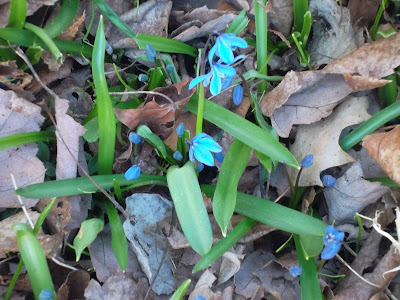 And even they were hanging their heads in defeat. (They're supposed to have their faces open to the sky.)

Poor things. I'll try again when it warms up.

Notice that one of those brave renegades also has a broken neck. There were fewer blossoms than I recall seeing a few days ago, which I suspect is the work of the deer who roam the neighbourhood. The deer that strip our rhododendron bushes of all buds and foliage except the odd leaf they can't reach.

This is what our "best" rhododendron bush looks like this spring (and every spring); 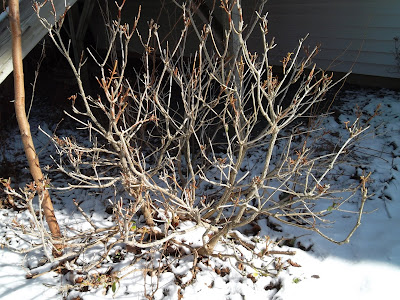 It should be covered with leaves and the buds that came out last fall, so it would be ready to burst into blossom with the warmer weather. Instead of beautiful deep pink blossoms set against shiny green leaves (that sound you hear is Donkey sobbing into her sleeve), our selfless shrub's tastier parts became part of a whitetail deer or two.

By the end of summer, this rhododendron will have struggled to make more leaves, and will probably be covered in buds again as well. And the cycle of life will continue once the cold comes and the deer can't find easy grazing in the woods.

And why don't we use deer repellent or burlap or land mines? Because I really hate to see wildlife go hungry.

On a brighter note, two robins visited our back yard today, and I got a lovely blurry photo of one of them. But I'm going to put it up anyway, because it makes me smile. This fellow/gal was looking at Missy the cat sitting in the basement window, while I took the picture through another window. He/she was looking mighty suspicious, and no wonder. Missy was making threatening k-k-k-k-k-k sounds while twitching all over.

No worries. Our cats are all indoor cats, and besides, as soon as Missy realized I was close by, she abandoned the bird and came running to meow for food.

Note to self: The basement windows could use a good cleaning.

Those are some fine-looking renegades, obviously sneering at the adversity they find themselves facing.
My mother loved her rhododendrons. We lived in town by the time she got any good ones, so the deer were never a problem. Before we moved, though, the cows used to wander into the front yard and chew on her rose bushes.

Ouch ... from your mother's point of view, and possibly from the cow's ...
We actually live in town but near the edge, in what was formerly orchards, so we've really taken over the deers' land, not the other way around. Another reason we let them chew the shrubs.

Good luck to the renegades. The wife and I have a hard enough time with the dog and that doesn't always bode well for the plants we plant every spring. Take care.

What delightful photos and descriptions. This is one of the main reasons I like the bloggosphere --I can learn about what the mechanisms of our planet are up to while they're at it.

Between the wildlife, the pets, and the weather, you really have to be an optimist to be a gardener, don't you?

In full agreement, Geo. - it's wonderful to get such a personal view from people all over the world. Ya learn stuff :)

I wonder if you could plant something specifically deer-friendly to feed them in lieu of the rhododendron? (But of course they would just eat everything unless you also protected the rhodie somehow, I suppose...) I'm impressed it survives being so thoroughly gnawed! My mom's hibiscus (in Florida) gets the same rough treatment from the neighborhood deer.

I'm amazed it's still alive, too. Since we aren't legally allowed to feed wildlife here, I don't begrudge them the shrubs TOO much, though!

I would rather be a rose-eating cow than a rhododendron
Eating deer, but not the kind of cow humans would want to eat. A magical cow, perhaps. A cow that tells fortunes, maybe, or divines water even. Maybe a cow like Elsa that travels the world in David Duchovny's book. This is me going off on a tangent, in case you couldn't tell, but I'll have to continue it later as we are late for baseball practice.

I think I'd like to have magical powers, but not so much the being-a-cow bit ... although when I used to chew gum, there was a bit of resemblance ...