I love good clean jokes but the only one I can be sure of remembering is this one:

Q. What's the difference between an onion and a set of bagpipes?
A. Nobody cries when you cut up the bagpipes.

Now, my fondness for this joke may make more sense if I tell you that I live in the midst of an area settled by Scottish immigrants, and also visited by lots of tourists every summer - tourists who love hearing bagpipe music. About twenty years ago this sort of tourist entertainment was at its peak, and during the summer days there was a bagpiper stationed at the door to the grocery store we frequented. Playing constantly. Every day. Do you know how loud that instrument is up close? I don't know why bagpipers aren't all deaf from the constant onslaught. Perhaps they wear ear plugs. I don't know. They must be hardy souls.

I should also mention that previous to that time (and since that time), I did (and do) enjoy the pipes; it was just that particular summer of bagpipe overkill which made me go a bit cranky and claim the above joke as my pet.

Anyway, because I like a good clean joke, this headline last week on MSN caught my eye: World's Geekiest Jokes. Turns out that it wasn't a very recent article, just a headline hunter's recent discovery, but good jokes don't age so I clicked through to check it out. I found not just geeky jokes but explanations of them, too. For the non-geeky, I guess. And one of them jumped out at me because Elephant's Child had just left a comment on one of my crow photos last week reminding me of the name for a group of crows - a murder.

Which leads me to the geeky joke I found and loved:

Q. What do you call two crows on a branch?
A. Attempted murder.

(Because technically it takes three crows to form a murder.) 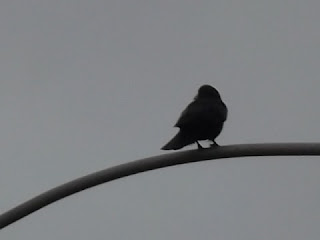 And this is not a murder of crows, either ... 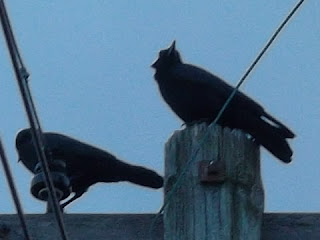 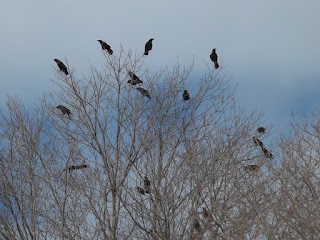 ... and from the noise they were making, I can understand how the expression came to be.


Then, I decided to check out the original Reddit question where the geeky jokes came from, because the crow joke was pretty easy to understand, wasn't it? ... and found only ONE that I really, really understood. I could follow the explanations given for most of them, but couldn't have come up with them on my own. And some of them were just too far out of my league to even understand the explanations.

Here's the single one I understood all by myself, and it's probably because this is not really a geeky joke after all:


(No ducks were harmed in the writing of this joke but the bartender may have had his ego bruised.)

So, tell me, what's your favourite joke?

I read it twice, then got it. My dad would have nailed it the first time. HaHa. Also my daughter, who inherited her grandfather's humor.
One night my mother served fish, filleted and spread out to look like wings. Whatever that is called. My four year old sister asked why the fish looked like that. Her next oldest brother replied that how they took out the guts. My sister, appalled, said "That's awful." "Yes, it was," said my dad.

Good ones! There are way more musical instrument jokes out there than I ever would imagine. Many of them refer to bagpipes and accordions. Some of them wonder which burns hotter.

Ha ha! The poor accordion - also the butt of jokes ... and also a great instrument in the right hands. When I was a kid I had the chance to try out a child-size accordion. That thing was hard to play! I was already familiar with piano by that time, but it was like a variation on the old trick of rubbing your belly and patting your head at the same time - so hard to do!

Interestingly (to me, anyway) bagpipes were a military invention. The idea was to make a constant, unbroken, sound to convince your foe that your army didn't even have to stop to breathe.
Don't know whether or not they worked in that capacity...

Bagpipe music makes my eyes leak. Every time.
Love the attempted murder joke.
One of my favourites is:
What is red and invisible?
Bloody nothing.

I am fond of geeky jokes. Thanks for these gems!

That is a cool fact - thank you. Sometimes we are so used to things in their current form or context that we (or I, at least) don't even think about their original use.

HAHA! I love it, EC! And I have to confess, bagpipes cause me to have goosebumps - one step away from leaking eyes, in this case.

Geo., I think you would like that Reddit site. They are all mathy and science-y jokes. Except for the duck joke.

Hi Jenny-that duck joke? I think it's a song. My song was singing it to me last spring...it's so funny!. He just said it's called the Duck Song?

Hah! What a coincidence! I wonder if Mr. Google would know the tune?

Found it, Chicken - and now it's stuck in my head!