Another day, another walk, more trees. Will the fun never stop? This time not all the trees are trees, though. And there are birds involved, too.

I know! Better hang onto your chair. 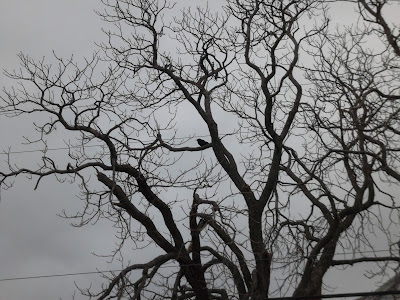 I love the graceful twisting branches on this big old tree. And see that object right there in the centre? You're right, it IS pretty hard to see, so I'll just tell you: it's another crow. Not one of the neighbours, though, unless he/she followed me.

And here is a former tree, also known as a utility pole:

I could hear this gull - he was very loud! - but I couldn't see him at first. He blended in well with the pole and the sky. I think he was asking if I had any fries or burgers or doughnuts in my pocket for his dinner. Judging from his tone, he was used to getting what he wanted.  I picked up the pace to get away from his stern looks.

After that, I went looking for bluejays. On my walk the day before, there were a half a dozen in every other tree, calling out in their twangy, metallic voices, begging to have their pictures taken. Now they were nowhere to be found. Probably at a bluejay party somewhere, snickering over inattentive photographers and natural consequences and stuff.

So here's a photo nicked from Wikipedia, because they had a lovely one:


Isn't he handsome? He's in the Corvid family, like the crow, which is something I didn't know until the past year.

Something I've known for quite awhile, in contrast, is that bluejays love to hide peanuts. For many years, our exterior Christmas decorations included a fake garland wound over and around the front porch railing. Every year without fail, when I took that garland down, I would find peanuts hidden under it. To truly appreciate this story, you must know that our decorations never went up before December 20 and came down by January 1. That doesn't seem like a lot of time for a bird to check out the new "evergreen growth" on our rail, decide to hide food in it, and actually get around to doing it. Maybe that's just my procrastinator's nature speaking. I always felt bad disturbing the peanuts, but I'm pretty sure the jays were hiding them all over the place, so it was probably okay.

More trees and more birds tomorrow, which will exhaust my small store of photos and cause me to move on to another topic. No updates yet on the crows who are moving in next door. Perhaps they have finished framing up the nest and are waiting for the drywallers to show up. If you've ever had a house built or a reno done, you'll know just how that feels.

We have blue jays year round. They don't use the feeders until winter. I didn't know they secreted peanuts.

Blue Jays are pretty, but they can be jerks, also. I've been walking through the woods and had a couple of Blue Jays flying ahead of me from tree to tree announcing my arrival to every other creature in the forest...

How I love the elegance of bare tree bones against the sky. And it does make it easier to see which bird is scolding/avoiding you.
I am sure the blue jays were off somewhere laughing at your failed attempts to photograph them. Birds do that.

Beautiful post on a day when I really needed to see one. Thank you. As to the lovely jay, the image copyright terms are:

So I think you're good to use it. However, I may have once signed an online contract to marry Bill Gates.

The bluejays are here year round as well. I'm surprised they don't use the feeders all the time. They're pretty pushy around here.

Oh, Doug, it's all in how you look at it. Kings and queens and other important people always have their arrivals announced. Do you feel better now? Actually, crows tend to do the same thing. It's annoying, yes!

I love the bare branches as well. It won't be long until they will be hidden in masses of leaves. And it's a relief to know that my suspicions about snickering birds are not just a figment of my imagination.

Thank you so much, Geo. I was a little worried. How did you figure out that information?

And you might want to check if that marriage went through. I hear he's pretty rich.

I thought the former tree was referred to as a hydro pole on your side. We often call them telephone poles on this side which makes much less sense now than a hundred years ago.

Some Canadians refer to them as hydro poles. In the Maritimes we are not that fancy. They're utility poles, or even just power poles. I think we still have telephone poles here. Once when our internet went out they had to climb a nearby pole to fix it, so I think I'm safe to say that.

Hi Jenny, I see blue jays here once in awhile but the cardinals command my attention. I love to watch them. I love your walks, too.

I've never seen a cardinal except in pictures, and that is kind of sad. I would love to see one. I'm enjoying my walks now that I've slowed down a bit to see what's around me - an unintended result of blogging, I must say!