I've had to start using comments moderation - sorry, folks. But never fear: I generally check in every day, and I'll publish your comments then.


Remember Spring is a Fickle Thing three days ago?

Crocuses were showing, grass was bare. 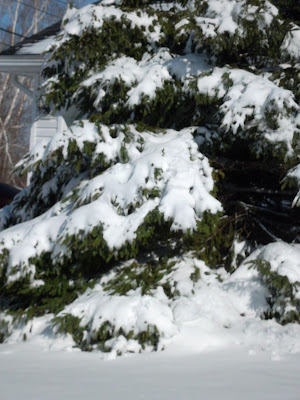 And by the time I went for my afternoon walk today, it had melted on the bottom layer because the ground was heating up from the sun, but the top layer was still fluffy snow - which meant that instead of stepping into fresh snow and creating this kind of footprint: 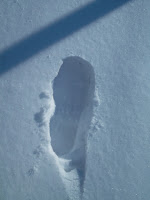 sometimes I stepped into snow that looked exactly the same but created this kind of footprint:


Yes, I was wearing boots. But not rain boots. Probably should have been wearing rain boots.

In contrast, the streets were bare, because most of the snow was plowed off in the morning and then the sun melted all the bits left behind. There were a few puddles as a result, and that made for some interesting sights, like this reflection of a tree ...

Further along, the snow was piled up on my favourite bench ...


and made a clean white background for the railings to throw their shadows on at the look-off shelter: 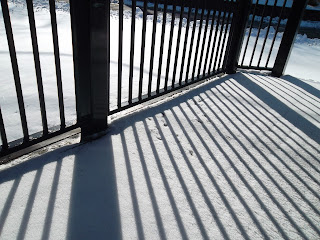 The crows were having a convention, or maybe a concert - it was hard to tell but it sure was noisy: 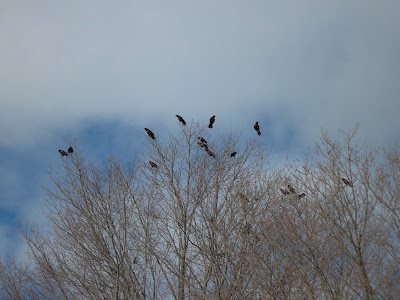 This rock wall made a nice contrast to the snow: 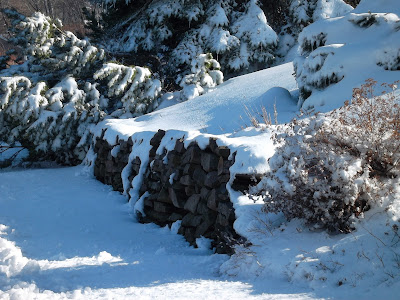 We still had snow on the deck last night, but this morning the rain has washed it away. Better weather coming, I know.

There's no stopping the seasons, is there? On a nice spring or fall day, I wish we could, but - not going to happen.

Lots of the bloggers I read (and all of the political ones) moderate their comments. It's more work, but it keeps the conversation where it still works...
It just rained for three days, and this morning the sun finally came back out. I would gladly take some more rain, because we need it bad, but I need to do some walking outside, also.

Delighted with your photos and descriptions. Thanks for taking us along on your walk.

We have had at least a little snow every day for the past two weeks. We have more now than three weeks ago. Forecast is for really warm later this week and on, but if it doesn't happen there may be a revolt of some sort. Or mass suicide.

Love all the photos, but the reflection...
So, so beautiful.
The crows were plotting. And if the people who decide collective nouns are to be believed (a murder of crows) nothing good.

I'm discovering I'm not a rain walker either. Not until it warms up a bit. I hope you get your rain at night so you can walk during the day.

Thanks for continuing to come along. I'm surprised how much more I see when I actually start to look. Oh, that is a silly statement, but you know what I mean.

The reflection was SO clear - the puddle was like a mirror. And I'm pretty sure you're right about that particular murder. They were loud and they were all talking at once. Just like a human gossip session :)

I love that pic of the tree reflection, and the one of the railing shadows is nice, too! :)

Thank you - coming from a real photographer, that's very encouraging!