Goodbye Autumn. I'll Miss You. But I've Got My Art To Keep Me Warm.

Like so many places in the northern hemisphere, we've had our first snow of the season. In fact, we had a couple snow events one after another.

Unlike many of those other places, we did not get an unbearable amount of snow. But it was wet and it was heavy and it made the roads very slippery.

In this photo we had just received a dusting, and it was late, so everything is kind of grey and colourless. But it has its own kind of beauty, I think. 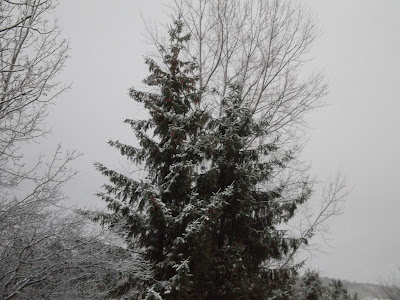 But just before I turn my thoughts too far toward snow and ice and cold, there's something I need to do.

I need to have one last look at autumn.


Those birds are a noisy bunch. They swoop down on lawns, peck bugs out of the grass, chatter to each other. I'd love to know what they're saying. These pictures show only a small part of the flock that was around that day.

And last of all, just before I wave goodbye to colour until, say probably April or May, I want to show you one more thing.

I already posted this picture here: 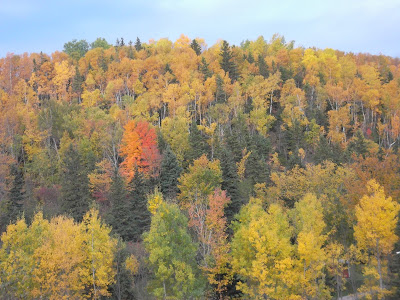 When I took this shot, I had something in mind.

From Grade Primary to Grade Six, I attended a rural two-room school. We had one teacher for Grades Primary to Three, and a different teacher for Grades Four to Six. In the "Little Room," as we called it (Gr. P to 3), we had Art class every Friday afternoon. I looked forward to it so much. It was a break from the 3Rs, and even though my artistic talent was confined to my baby fingernail, I loved to mess around with paint and chalk and collage materials.

Here is one of the pieces we did in Art class. It is a sponge painting of "Woods in Autumn" - the teacher showed us how to take a small square of sponge and different colours of paint to create what we felt were masterpieces. With the advantage of a few decades of experience, I can see mine was not nearly so; nevertheless, I hold this and all the other little pages in my art book close to my heart.


I'm saving a post about our teacher for another day. She was a remarkable lady and deserves her own space.

Here's the cover of my art book, by the way. We used a potato stamp (really) to make the pattern of circles.  You can see how I started every line with a load of paint on the stamp, and kept grimly using the same paint to the other side, growing fainter and fainter!


This isn't the first thing I would grab if I had to evacuate our house (people and pets would be first, of course) but it's irreplaceable, to me, and would be a serious contender for top five.

How about you? Did any of your childhood creations, in or out of school, survive the years to the current day? Did you create something that you can't bear to give up, that says "I did this, and it makes me happy to look at it"? Or did your abilities tend toward activities and games and such?

As I may have mentioned at some point, I was neither coordinated nor competitive, so my achievements did not run to sports or teams ... but if yours did, please tell me about it. Or maybe you were what we called well-rounded, you lucky devil - good at everything! Tell me that, too :)

Nice thoughts. When you see those pictures you're sorry to see Autumn go.
Nothing from my schooldays made it this far and that says it all really.
I've always liked football. That was my sport when I was a kid - it still is.

I adore your Woods in Autumn, and would happily display it.
Art? I was told firmly, early that I have no artistic talent. I am a sporting klutz too.
Post school (a long way after) I took up embroidery and quilting for a while. My hands will no longer let me play, but I am glad I had that window of opportunity.

O Jenny, these photos are beautiful! As for your question, my childhood drawings survive only in memory. My grandma would fold up paper from the butcher's and tuck it under a corner of the wall-phone in her back porch where I could get it. I doodled away and she called every effort a "beautiful macaco" (macaco is Portuguese for monkey). I would say,"But grandma, it's a picture of grampa!" She would throw her head back and laugh:"Aw, he is a beautiful macaco too." In art, there is so much love. Hang onto those folders, Jenny.

I love that you saved your art all this time! I'm not sure any of my childhood art still exists, though I did go through a period where I wanted to be an artist.

And yes, the "colorless" palette of winter has its own beauty.

I may have a few drawings somewhere that I did in my teens but nothing earlier I don't think. My mother made me throw everything out. I do remember making stamps out of potato though, but I don't think my attempts were as good as yours! It looks like you wrote the word ART on some old loo paper! Ha.

I have a paperweight on my desk. It's 67 years old. My first grade teacher produced those glass castors that go under furniture legs. She was disappointed that all she could find had ridges, and did not have a completely flat bottom. But we made do. We took our school picture and she cut out our faces to fit in the small circle in the middle. Then aluminum foil, then plaster of paris, and last a felt pad. I remember she wanted to fit the whole picture, with some trimming, into the flat bottomed castors, but I think the one that went home for a Christmas present is just darling. I recall my mother making a big deal of sending the school picture back in an envelope, and I bet there was a quarter in the envelope, too, to cover the cost of supplies.

I think your football is what we call soccer? It's nice that you've kept an interest in it for so long.

I think whoever told you that was incorrect. Anyone who can embroider and quilt has art in them. I'm sorry your hands are not cooperating now. It's difficult to lose the ability to do things we enjoyed at one time. But now you have become a wonderful photographer - another artistic endeavor ...

Oh, I love the picture you have given us with your words! I bet she called you a macaco from time to time, too :)

I've always been a pack rat, and fortunately, my mother encouraged it where artistic creations were involved. When she first started downsizing there was a steady stream of "stuff" from her house to ours, things I made that she couldn't bear to throw out, but I did (shhh, don't tell anyone) :)

But the art book survived :)

Aha! I'm glad someone remembers potato stamps! I think the teacher must have made those; I can't imagine her letting us have knives!

You made me laugh out loud with the loo paper remark! It does, doesn't it? :)

Love it - those teachers were worth their weight in gold, weren't they? And parents appreciated that, too.

I wasn't attracted to painting or drawing as a child, with the exception of motorcycles, I loved drawing motorcycles, and none of those made it into my adulthood. I still have some songs I made up when I was 16 or 17, do they count?
Yesterday while I was walking in the back yard, two or three bunches of crows flew over, just cawing away, and I wondered what they were up to. Then I heard the call of a hawk, off in the distance, in the opposite direction from where the crows were flying...

I'm ready to skip winter. Blah. I just find it less and less bearable as I get older. I completely understand why people head south for the winter. They have the right idea.

How wonderful that you saved your art! I don't have any art I made and I'd have to ask my mother if she saved any. I have saved a lot of the art my daughters made, along with other things, and have packed them all into large storage containers. Eventually I'll give them all to the girls if they want them. I do have some of their drawings and artwork framed and hanging on the walls. Brings back so many memories...

Those definitely count! Something for your blog when you get it started (hint hint) ...

Re the crows and hawk - it's interesting what you can see when you're paying attention, isn't it?

A lot of people feel the same way, Mr. S. Actually I don't mind it. The heat bothers me more. But I know plenty of people that are in your camp. My brother, for one :)

Thanks for commenting, Martha. Those things really do bring back the memories, don't they? I can remember actually doing that picture. I wonder if I'd have that memory without the picture itself.

I was more a musician than visual artist as a child. Having an artistic child myself now, I realise how much more space it needs! We have art coming out our ears...(hmmm...not music? ) I realise how much less space music needs, although the instruments are another story!
I love your autumn photos, and the birds gathering before heading south is gorgeous. I also love the comparison of autumn trees with your childhood painting. I just adore children's art. So intuitive and fresh!
Thanks for your comments on my photos, I appreciate your point of view :-)
Xo Jazzy Jack

Thanks for dropping by, Jazzy Jack. There's a lot of artistic talent in your family! I like children's art as well :)

Hi Jenny, I love your art book, and your fading technique is very much on trend right now. From my sixth grade art class, I' ve managed to hold on to a block print of a ship at sea that was chosen for a gallery show. Tried to take a photo of it to paste here, but it doesn't seem to be working for me. I was never consistently creative but, at times, i hit a sweet spot. Sort of, maybe, like fall is our sweet spot in the year. Brief but colorful, affecting all the senses.

Yeah, when my mom moved to her retirement condo, she asked me if I wanted any of my childhood creations. I didn't take them!

Thanks, Chicken. I'd love to see your print. A gallery show - how exciting that must have been for you!

Nope...never held on to any of those childhood attempts at art...wish I had though.

Welcome :) The older I get, the more I appreciate the stuff from my childhood, somehow :)

Some of my childhood art still exists; you've inspired me to think about sharing them sometime. Your fall foliage is lovely! I think you might enjoy painting again. I'd love to see the work you'd do now.

Oh, I hope you do, Angella. That would be interesting!

So should I use a sponge now or upgrade to brushes, do you think? :)

entirely your choice, my dear!