Spring Is Not Springing; Actually, It's Kind Of Plodding

I must admit that I only ever recited the first three lines, because it gets complicated right in the middle there. But I knew there was more, and thanks to Mr. Google, I was able to find it.

Spring izn't springing very fast here at all. Our temperatures have been staying cool for the most part. My starflowers aren't getting enough sun, and they are still hanging their heads, even as they grow past middle age and head into their golden years (as we humans laughably refer to them ...): 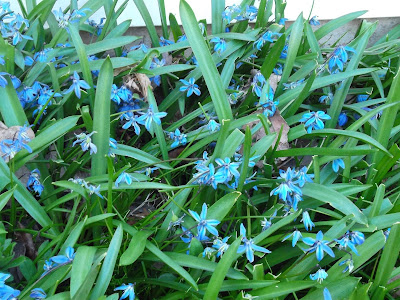 My crocuses lasted about three days before the deer cleaned them off. But we have these pale violet-coloured bulbs flowering and they must be a flavour the deer don't care for, because they haven't disappeared:

Our butterfly bush, which we planted last summer and pruned back in the fall, per the nursery's instructions, survived the winter:


And our adorable little boxwood shrub, which is about a foot high, survived the winter as well. Seriously, this thing is so cute I just want to put a little hat on it and take it for a walk in a pram: 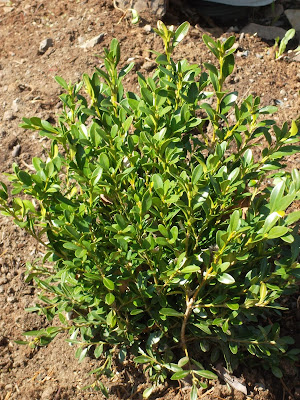 The trees haven't made a whole lot of progress putting out leaves, although they're starting to bud: 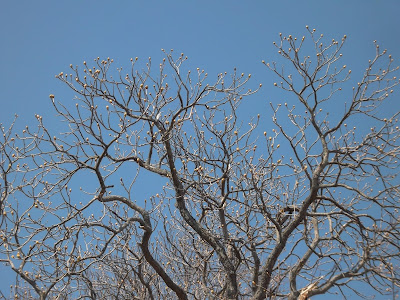 I don't mind that spring is slow, though. The cool days (and cooler nights) are my idea of perfect weather. Good thing it comes twice a year. I can't imagine having two summers or two winters - that's like Goldilocks and the porridge that's Too Hot or Too Cold - but spring and fall are like Baby Bear's bowl of Just Right.

Mmmm ... porridge. Another thing I like. And in this cooler weather, it's my daily treat.

How's the weather where you are?

The weather here is unreasonable. It snowed yesterday and I brought in the hanging baskets.

Wow, you really ARE quite a bit behind us there. Our trees are much more leafy and our butterfly bushes are fully-foliaged! What are those purple flowers in the second photo? I don't know either, but I like them.

We get snow in May sometimes as well. That's why I don't even bother to do any gardening until June and then everything is behind for the rest of the season! I don't have the energy or interest to tote plants in and out and protect them from marauding cats :) Perhaps if I took more care my yard could start looking more like yours!

I'm not sure and I did a quick search but when I found what I was SURE was the same thing, its native range was "Turkey" - and we do not live in Turkey - so I'm thinking I was wrong :) I think my best bet is to watch the stores for those and get the name from the box. While I'm buying more of them, of course.

We're supposed to be getting another mini-heatwave for the next three days. The birds here all think it's summer already, and all of the little flowers in the back yard are starting to have that elderly look to them. Maybe if it rains again this week, which it might, it'll look like spring again for a while.

Your spring seems to have sproinged over here. At least a bit.
I think the flowers that survive deer depreciation are Triteleia.
Waiting for bud burst can take forever - but is exciting.

The heat really speeds things up, doesn't it? We had one warm day awhile back and the next day everything popped up and out a bit. But then it has just stayed the same ever since.

Yes, I have to agree about the waiting and the excitement. This is the first spring in years and years that I've had the time to stop and look at things. It's nice.

Delightful post. Spring is a season around you but it's also inside. As Anon. says, "Da little wings iz on da little boid." Not just the other way around.

Seems like things are slow all across North America, doesn't it? Anonymous has written some really great stuff :)

Just about the same here as what you are experiencing. The buds are about to turn into leaves any day now. I wonder where da flowers iz?

It's been cold, which is typical, but this week it's finally warming up--which is why I need to go outside and get some flowers into pots!

Isn't it nice to get back to the earth in the spring? Have fun!