As the month of May unfolds and the landscape changes from brown to tender green, certain days pull me instantly and intensely into May of last year. My father was battling pneumonia from April until his death in late June, and he was hospitalized several times during that period.

Every time it was the same. I could see that he was becoming unwell as I visited him each evening at the nursing home. But there was a threshold for symptoms that had to be reached before he could be sent to the hospital for treatment. I should have gotten used to the phone calls that always made my stomach lurch and my heart pound - but I didn't; I couldn't. Every time, I dropped whatever I was doing - my job, my home life, my night's sleep - and hurried to the hospital to meet the ambulance bringing Dad to Emergency. I learned to pack my purse with enough snacks to carry me through the long hours while he received initial treatment and waited on a stretcher in the ER for a regular bed or one in the ICU. With low staffing, overflowing patient loads, and Dad's high needs as a paralyzed and frail patient, I did not want to leave him alone in the ER for even a few minutes. To help his breathing, the head of his stretcher was always raised, causing him to slide toward the open end at an alarming rate. He was usually on oxygen and would try repeatedly to remove the nasal prongs which irritated his nose. Doctors and nurses could arrive at a moment's notice with questions about his symptoms, usual medications, and a host of other things that he could not answer. So I stayed with him until he was placed in ICU or on a ward.

Even after he was transferred to a real bed, I spent many hours with him each day to try and ensure that he was as comfortable as possible and got the care he needed. With one side paralyzed, he could not turn himself over and his back and bottom became very sore very quickly. He could not eat by himself. He was often very thirsty because of his medications but could not manage the cup of water. He needed tissues almost constantly to deal with the secretions he was coughing up, but he could not find them on his lap. When he needed a bedpan or other care, he could not seem to grasp where the call button was located. He was frequently disoriented, sometimes delusional, always uncomfortable, and often anxious.

I am explaining these things not to be dramatic but to give you an idea of how much time I spent in a hospital room last May. The winter that had just ended was a long, stormy one, and spring was finally on its way. I could see it arrive from the window of Dad's room. The small median strips of grass gradually turned green, then the shrubs in the parking lot across the street, and finally the trees in the distance. People - including me - went from winter coats and boots to spring jackets and shoes. The air became sweeter and the days longer. I will never forget the contrast between the renewal of life outside and my father's struggle against the dimming of his life inside his hospital room.

And this May, this month I have always loved, the month when my dear father, for many years, brought me a bouquet of fragrant Mayflowers on my birthday - this month of new life in our hemisphere, as the grass takes on its vibrant green, and the trees finally unfurl baby leaves that grow daily like magic - these days, when the breeze is fresh and the light is 'just so' ... these wondrous May days have been bittersweet, my friends. 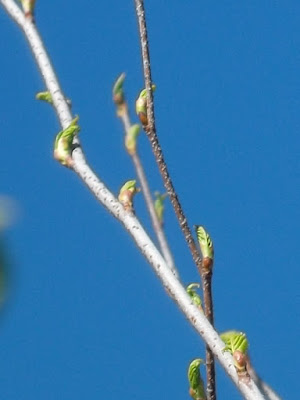 Bless you for the care you gave your father. I hope you have a good May this year, and a happy birthday, whenever it is.

Yes.
I am so glad that the sweetness is still there, but well remember and feel the bitterness too.
These days, thankful as I was for them, tears prick at my eyes each time I see or hear an ambulance. The memories are still very, very strong. And, each time I go past the hospital my eyes automatically go to the wards himself spent so much time on. Are the blinds up or down? Is he having a good or a bad day...
Happy belated birthday. And hugs.

I wonder if Dad said, "Listen, it was a mighty mean winter last year, when my Jenny-O came at every beck and call. Let's lighten up this year." And, it did.

Thank you, EC. For both.

It was a beautiful spring, wasn't it?

A beautiful post, jenny_o. Thanks for sharing and a happy belated birthday. Take care.

As a birthday gift, I can only say what is in my heart: You are the definition of compassion and loving devotion for one who needed you. I count you among my heroes. O Jenny, brava.

He was kind and easy to love, Geo. Thank you for your own kind words.

"I will never forget the contrast between the renewal of life outside and my father's struggle against the dimming of his life inside his hospital room." This is one of the most incredible things I've ever read. So bittersweet. Your love and devotion for your father is wonderful. It sounds like he was a beautiful soul who raised you to be the same.

That was a hard spring, but he was easy to love and appreciated everything that was done for him so much. I miss him. Thanks for reading, Martha.

the day i heard about my father died i got periods which last for two months ,,since then my hair are falling and no smile or laughter of mine makes contact with my inner world
everything is empty ,blank and meaningless
still i am supporting my family with all the positiveness because this is not their fault
may your heart find peace dearest Jenny!

And your heart, also, my dear friend. We need to remember that our departed loved ones would want us to enjoy all that life has to offer, even when our hearts are sore. Life is for living!