Strange Patterns On The River, And Strange Things Not In It

I may have mentioned a time or two dozen that I take my point-and-shoot camera everywhere with me now. You never know what you're going to see, even on a path you walk every day. That's part of the draw of walking outside for me. I don't think I'd stick with walking around a track or on a treadmill for very long.

Last week I was delighted to see these patterns in the ice on the nearby river. The currents in the river probably had something to do with these swirls and sworls. The first two photos were taken facing away from the sun, and have this ghostly blue-white cast. The rest were taken toward the sun, and look normal, but I still find them intriguing. 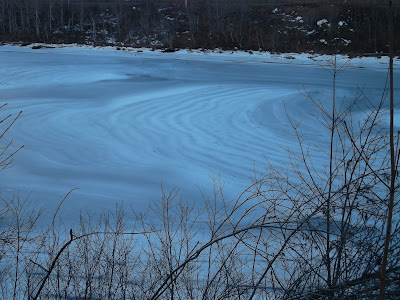 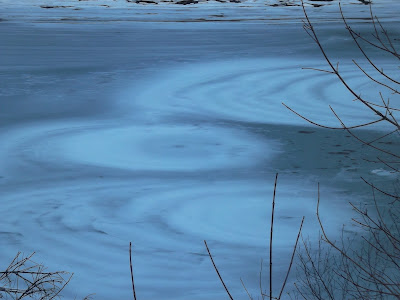 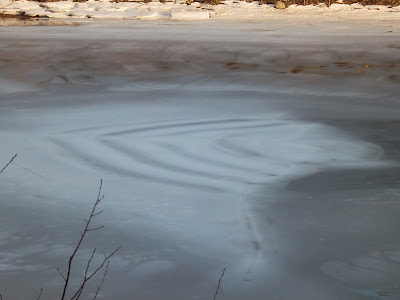 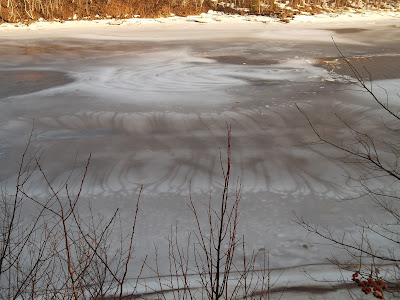 Do you see the open water at the left and right of the above shot? Below is a closer look at the water to the right, where some gulls had gathered to take advantage of the "liquid ice": 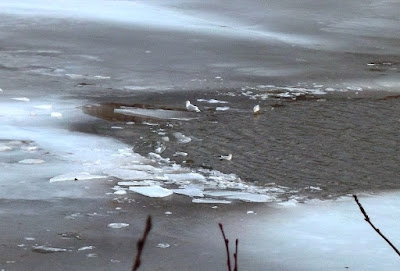 A few days later, the surface of the water had frozen again, but it was only a thin layer of ice as I could hear it moving and shifting, giving off cracking and crunching noises as I listened. The freeze/thaw cycle we have seen so far this winter has meant the ice is never very thick, and sometimes not there at all. That may change as we head into the coldest part of the season.

At least we don't have any of these in our river:

And in the summertime, there are none of these: 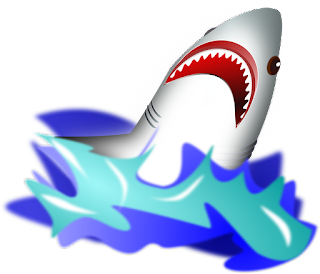 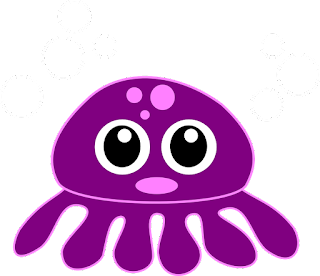 ... although I'm not absolutely sure about that purple guy ...


Have you ever been up close and personal with an iceberg? a shark? the Loch Ness monster? an octopus? Any other strange phenomena? Dig deep, and tell me what marvels you've seen with your own two eyes ...

Love those first shots. Awe and wonder.
I have indeed been up close and personal with icebergs (and wish I was at the moment). Beautiful things, and penguins sliding down the sides just added to the wonder.
I am intrigued by octopuses too. Very, very intelligent critters.

Oh yes I've seen the Loch Ness monster, just before he was eaten by a shark. And then when I looked closely at the shark he appeared to be covered in all these purple jellyfish or maybe it was an octopus, I'm not sure as there was a big iceberg blocking my vision.

Okay, I need to get a grip and stop with all these white lies.

Our river is not so inviting as yous. It moves swiftly along; I wonder if it ever freezes.

Well, not any of these in your list but ask me a bout beluga whales and yes I've been close.

Interesting ice patterns! I never noticed that before, but honestly I haven't often lived in a place where ponds freeze over, at least not very thickly. The ponds on the Heath were frozen yesterday but the ice was thin as glass.

HAHAHA! I had a good laugh with the ending of this post. I can't swear that purple critters aren't around here but I can swear about the rest. I've never seen any unusual 'marvels'. I guess I live a relatively normal (albeit safe) existence :)

I was swimming off Porthcurno beach in Cornwall, which slopes steeply into the sea. I was idly back-stroking parallel to the shore when I realised I was the only one still in the water. People up on the cliff were waving and calling, so I thought I should swim to shore. On the way in I bumped into rocks and hurt my legs . . then realised there weren't any rocks in such deep water. Dipping down below the surface, I found I was right next to a Basking Shark and had just swam over the top of it. I made it to shore in double-quick time and had to be helped from the water; couldn't speak and when I looked down I saw that my shins were bleeding.
After calming down, I was told that Basking Sharks only eat plankton - this one had been seen approaching, just drifting along the coastline. My legs had been grazed, not bitten, as I had feared, and I wasn't hurt at all. But I never went in the water for a long, long time after that!

I remember your posts about your Antarctica trip, EC. FULL of marvellous things and critters! Actually you came to mind when I found the iceberg picture after searching for "ice" to complete the post :)

And I think you're right, that's a jellyfish. I forgot to count the legs/dangly parts. And the picture was labelled "octopus" - just goes to show that you have to have your wits about you on the internet ... (biggest understatement ever)

My parents remember when the river would freeze thick enough that people used it as a shortcut!

Wow - okay, I'm asking, and I'll ask at your blog too, just to cover all the bases!

Yes, I think you'd need more sustained cold weather than you tend to get there, in order to freeze a pond well. Maybe it's just as well you have that moderate weather! More comfortable.

Me too, Martha! As Joey pointed out in the comments, that's probably supposed to be a jellyfish, and I've seen lots of those, but the rest? Nope.

Now THAT is a story for telling!! I'm glad you were unhurt. I wouldn't have gone in the water again probably EVER.

When I was boy I saw The Loch Ness Monster. See
http://beefgravy.blogspot.co.uk/2007/11/confession.html

I've seen sharks but always got out of the water when warnings came, and in the tropics we had a lot of jellyfish.

When I was a little kid I used to catch sharks off of the Eureka Fisheries dock and sell them to the local aquarium who fed them to the sea lions.
I used to do all kinds of stuff to support my motorcycle habit before I was old enough to have a real job.

Thanks - I felt lucky to catch them.

That's intriguing, YP. I've always been fascinated by stories and photos of Nessie. Now I can say I know (bloggily speaking) someone who's actually seen him/her!

You're braver than I am - I'd never get IN the water in the first place!

Well, that sure beats my story of collecting pop bottles by the side of the highway for spending money ...

Thank you for such a lovely post and photos !!!
how amazing to take camera everywhere and perserve the beauty of nature.
we live half hour away from our largest river in country ,once when it was flooded we went to see it from bridge and saw a fighting of huge snake and mongoose over the floating piece of wood in there .

I like your thought about preserving the beauty of nature - that is a good way of stating it!

That would be very interesting to see the snake and mongoose. All of nature's creatures fight for survival, don't they?

The ice patterns on the water are absolutely fascinating --a geometry of current and cold. Thank you for taking us along to see it.

Glad to have such good company on the walk :)

Hope you haven't washed away yet there, Geo.

I love the cameras you can carry in a pocket. I'll have to take mine more often so as not to miss out on a good image.

I've really been using mine a lot since I started taking it with me all the time. You never know when you might want it! The small size is very convenient.