For more poems, visit Diane and Delores, my partners in crime. Except their poems are all originals. And good! And if you'd like to join us, leave your poem in the comments section of any of our blogs, or let us know where to find your blog.

Which, according to Doug in the comments on Friday's post can reach top speeds of 200 MPH.

I would like to be able to say I spent the week searching my soul and pondering and ruminating until I crafted an astounding piece of poetry. But the truth is that I was checking on my mom four times a day to make sure she took her antibiotics (because she was quite confused), and I was working, and doing all the usual other stuff, so this week Poetry Monday was looking like it would be bleak and empty.

Then I remembered a poem from my childhood. (And I realized I lied when I said HERE that I've only memorized two poems in my life. Because clearly I still remember this gem and that means I memorized it, too.)

Maybe I remember this verse so clearly because of the circumstances. My uncle was a member of the Armed Forces and was stationed in Egypt as a member of the UN Peacekeeping Force in the 1960s. My aunt (his wife) and their three children were visiting us for a few weeks in the summer. My brother and I brought the total kid count to five, ranging in age from three to eleven; I was in the middle of the pack at about seven years old. One day, when we were probably driving our mothers up a tree with our behavior, we were tasked with writing letters to my uncle. We used blue airmail paper, tissue-thin and of small dimensions, because it cost less to send it overseas. Then, as now, I loved any kind of paper and this was particularly intriguing because each sheet folded up to make its own envelope.

I had to plan my letter carefully because there was so little space on the page. I didn't really know what to say to my uncle. He had been a rather hazy figure in my life until that point. But I knew he liked jokes and funny stories, and I had just read a good one in a children's magazine. It went like this:


A peanut sat on a railroad track;
His heart was all a-flutter.
A train came speeding down the track --
TOOT!! TOOT!! Peanut butter!!

When I read it, I laughed so hard I had a stomach ache and tears running down my face. It was just one of those times -- you know what I mean? -- when something strikes you as being SO funny and the more you think about it the funnier it gets.

So I started my letter with the usual enquiries of his health, and the fact that my health was good (i.e., "Dear Uncle, How are you? I am fine."), and then offered up the adventures of Mr. Peanut.

When my uncle returned from Egypt, I was thrilled to find he had brought me a finely tooled drawstring purse made of soft leather, which I treasure to this day. In it was an Egyptian coin which I have kept for all these years, too.

And most important of all, I still have his letter that he sent in reply to mine, before his return to Canada. In it, among other comments, he said "this old country is hot and dusty," and that he had liked the verse very much.

What a kind response to a child's attempt to entertain. I'm fairly sure his deployment wasn't very much fun and that verse didn't do much to help. But it made my day when that thin, blue letter arrived in our mailbox with my name on it.

Maybe next week I will be able to crank out an original poem, for a change. Wish me luck; I'm going to need it.

This fellow doesn't need luck. He got his head in there with the peanuts by dint of hard work, a clever brain, and a nose like a bloodhound. Not to mention those little paws.

I think there's a lesson in there somewhere for me. 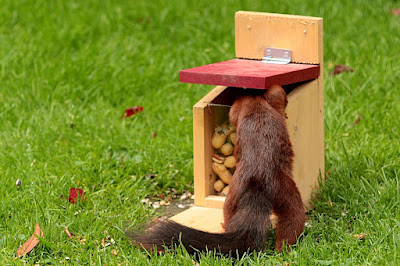 I remember that one. And a few in a similar vein.
Bessy met the bus,
The bus met Bessy.
The bus was messy.
And the mess was Bessy.
My youngest brother LOVED that one.
I hope your busy week calms down -and look forward to whatever you post. Your own, or others.

Lovely piece of writing to make my tiring day my friend!

I am sorry that your mom is not well and you have look after her all the time.May she be blessed with long healthy life,amen.
Sometime such eras come in life like speed breaker ,there was time when i used to be upset with spontaneous flow of poetry in my mind ,but now since more them three years my brain is getting blank ,even when i try to awake my imagination there seems no sign of light .
It could be the effect of disease or tiredness i am facing may be .
I too loved your little innocent poem to your uncle and how great that you kept all those years his ,letter and coin with care.
wishing you a wonderful poem from your lovely mind next time my friend!

Your poem was the perfect thing to send to your uncle. For my contribution, I offer a poem from my journals, dated 2/28/95:

The outside of
Any circle
Describes an
Infinitely
Greater one.

That is a very RED squirrel. I wonder if that photo was taken in northern England or Scotland, where apparently there are still red squirrels in the wild?

I liked your story about your uncle and the letter. I remember that blue airmail paper. It's sad that we no longer send letters like that -- there was a certain romance attached to receiving a piece of paper that traveled so far!

What a great post! I loved this story. So cool about the purse and the coin. Your uncle sounds like he was such a kind and thoughtful man. And I laughed out loud with that peanut on the railroad track. It's a cute, silly kind of funny.

I'd like to think that funny little verse gave your dear uncle the only smile and chuckle he had that day.

A Syrian child is washed up on a beach
No comment
The Italian navy rescue another packed inflatable
No comment
A buffoon in The White House rips up all the rules and yells "YAAAAA!"
No comment
A starving polar bear drifts away on a chunk of ice
No comment
Another fracking site is identified and drilled
No comment
This unpoetic poem, strange as it might appear, receives
No comment
Tragically, comment moderation has not been enabled.

Your Uncle's response had a lifelong influence on your life. Kids need these meaningful responses.

I'm groaning and laughing at the same time! Thanks for adding to the knowledge of the child in me :)

Thank you, and I hope your poetry begins to come back to you soon, baili!

Lovely addition to Poetry Monday, Geo. I see you were as succinct in '95 as you are now!

Emails just aren't the same, are they? :)

Maybe someone enhanced the colour in that picture of the squirrel!

Yes, he was (and still is) a thoughtful guy.

Silly is good, no matter what age we are!

That's a nice thought - I hope it amused him a little :)

Thank you for adding your poem here, YP. A true and sad comment on the lack of action by many who are in a position to do something about these things.

We never know for sure what we do that might have that kind of impact, do we? So we should always try to do the right thing.

There are many ways to celebrate Poetry Monday, aren't there? :) I'm finding it surprisingly hard to write anything of my own!

This isn't really a poem, but here's a comment I left on Pamela Merritt's excellent blog "Angry Black Bitch" on the occasion of her tenth blogiversary. She is an activist for reproductive rights in Missouri and has a lovely writing voice:

"May the information superhighway rise to meet you.
May the winds of social media be always at your back.
May the sunlight of transparency shine warm upon your face,
and the rain of justice fall soft upon your fields.
And until we meet again, may the Flying Spaghetti Monster hold you in the palm of his noodly appendage.

I had to drink that toast with strawberry soda, as I no longer drink alcohol, but I drank it just the same."

An adorable photo and a wonderful family story...thanks!

I enjoyed this post and your poem from your childhood.

I would love to have some transparency and justice in the world right about now! Thank you for sharing this with us, Doug.

Thanks for stopping by, e!

Thank you! A bit of silliness for Monday.

I was looking for a peanut picture of some kind when I found that. It was too cute not to use it :)

This is my little contribution to your Poetry Monday.

Time has gone,
Never to return,
Let's make some notes
And inwardly learn.

Of mistakes that are made,
At home and abroad.
Let's govern by fairness
And never by the sword.

Excellent questions and hard to answer in some cases. Well done, and thank you for adding your voice here, Joan!

a drawstring purse made of leather
with a coin...so fine together
these gifts they brought many pleasures
that to this day she still treasures~

Hi, Jenny, I loved this post and that smarty pants squirrel 💮

Thank you for turning this into a poem, Jan! I am thrilled! You are a natural for this Poetry Monday thing :)

All the best Jan

Good! Thanks for dropping in, Terry.

They are such characters!

I'll drink to that one, Doug. Today's beverage will be a fine cup of black coffee in honor of Twin Peaks returning to television. I am SO excited. I might eat a peanut butter sandwich with my coffee in honor of Jenny's nutty poem.