A River In The Sky

Last weekend while running errands, I took this picture from the parking lot of our mall. The sky was intriguing with its layers of clouds - heavier ones further away, and smoke-like wisps hanging in the air in front of them. 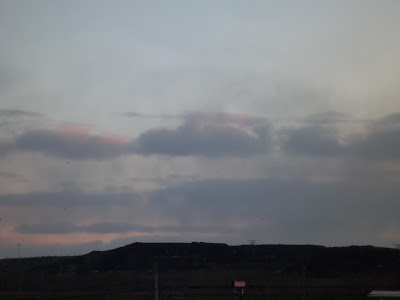 I kept snapping pictures, ignoring cars that were driving by, pretending I was comfortable being stared at, because Hey, this is my job, man... even though it's clearly not, at least not when I'm carrying only a point and shoot camera.


And as I clicked and clicked in the deepening twilight, I realized I was seeing something else in the sky. 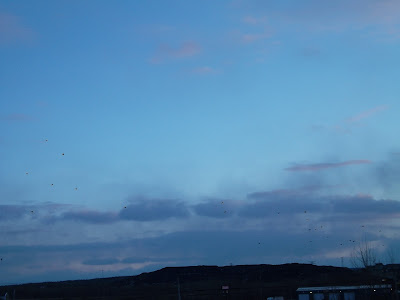 Can you see them? If you click on the photo it will get bigger, although if you have sharp eyes you may be able to see what I'm talking about without enlarging it.

All those black dots that I'm hoping you're able to see are crows, and they were flying to a local roosting area. Every day in early evening, thousands of them come from all over to fly steadily in an overhead corridor until they've all reached their safe sleeping place, a wooded area off the highway.

This sight always gets my attention. There are just so many birds. They come in a steady stream for about thirty minutes as the sky darkens with the setting of the sun.

The first time I ever saw this phenomenon was about nine years ago. My father was in the hospital after his stroke, waiting for an opening in a nursing home. He was able to get around a little in a wheelchair and we had gone to one end of the hall to look out a large window at the pinkness of the early evening sky. We began to notice birds flying toward us and over the hospital.

On and on they came; it seemed there would never be an end to them. I can still see the black wings silhouetted against the rosy sky, wave after wave of crows, instinct driving them to gather for shelter as the day ended. Positioned on the top floor of the hospital, we had probably the best seat in the county from which to watch the spectacle.

It's a bittersweet memory, spent with my dear father as he struggled to adjust to his newly constricted life with hemiparalysis, yet filled with the beauty and wonder of nature and its creatures.

You'll find there is a short break in the stream of crows partway through the video, but things get busy again within fifteen seconds. You'll also hear the traffic going by, which is why the camera was aimed so high in the sky. At least none of the drivers got shouty at me, and don't worry, I was safely parked and not in their way.

If you want to read more about my father's stroke and paralysis, click here.

Happy weekend to all. I will return on Monday, and there WILL BE exclamation marks involved.

I love the corvid family and always marvel at them. I hear you on the bittersweet front - but am so glad that there is sweetness to remember. Lots of sweetness.

Have a wonderful weekend and thanks for the murder of crows!!

have you ever watched a murmuration of starlings.......fascinating. Looking forward to those exclamation marks.

Also, meant to tell you, you might like author, Ann Hood, since you like Anne Tyler and Elizabeth Berg. She lives in Providence, RI. I just finished her latest book, "The Book that Matters Most", which is set in Providence. It was good. Also, have you read Ann Patchett at all? Her book, "Bel Canto" is one of my favorites and I also remember liking, "The Patron Saint of Liars" a lot. I've purchased "Commonwealth" but haven't read it yet. Don't mean to go on-I was inspired by your list over there. We have similar tastes.

We have more than a few crows around, but I've no idea where they hang out. It's the geese I'm used to seeing overhead.

Love your photos and the story as well. I was able to see all of those crows. Must have been really awesome to be there in person. Have a great weekend too.

One of the things on my bucket list is a starling murmuration. https://www.youtube.com/watch?v=iRNqhi2ka9k

So glad you witnessed that beauty with your father. What a wonderful thing to share.

Me too, EC. I need to remember that.

Such glory, eh? Thanks, Chicken :)

Ooh - thank you. I love recommendations and will check those out. I found Elizabeth Berg's books at the dollar store - unbelievable. Why do people not buy all of these before they get sold off to a discount store??

Geese are cool too. And they make me smile with their funny honking :)

You have excellent eyes, Mr. S. And it was something I never tire of seeing, but it was especially nice the time I saw it with my father.

Oh, wow, that was wonderful - I've seen small flocks of starlings dip and swoop but this is incredible - thank you!

I just watched the video linked by Linda, in the comments below, Delores - incredible! (and there's an early ! for ya)

We have a bunch of crows in the trees just up the hill from our back yard. They caw and natter at me when I walk my laps back there.
My dad was a duck and goose hunter, and he took me with him to Tule Lake (right on the Oregon border) a bunch of times. There were two times when I was pretty much overwhelmed with the sheer numbers of birds there, once when it was windy and millions and millions of ducks all flew over for a couple of hours, and once when the weather was too good for hunting and we couldn't find any birds at all, so we just sort of wandered around the edges of the refuge, to the south end of it where my dad kept stopping and listening and swearing he could hear geese somewhere.
Finally, I started hearing it too, and we drove up onto this vista point where the sound seemed to be coming from, and there were a few other hunters and a couple of game wardens at the far edge of it, looking down at the lake with binoculars.
By then the sound was loud, and I'll never forget what we saw up there. There were, by the game warden's estimate, six million snow geese, feeding on the standing grain at the edge of the lake, and flying in spirals up and down from so high you couldn't see them with the naked eye.
It was the Pacific Flyway, stopping for a meal where they knew they wouldn't get shot, coming straight down in great spiraling curves to the protected center of the refuge, eating their fill, and then taking off and spiraling their way back up out of shotgun range to continue south. The effect was of a giant pillar of snow geese disappearing into the sky and rising up from a solid field of them at the bottom.
My dad was still disappointed that he didn't get any geese that trip, but even he seemed to be impressed by the sight.
I've been watching my exclamation mark usage, and I kinda wanted to use one after the "six million snow geese" but in retrospect, it looks better without it.

I love watching the sky. The clouds and birds are fascinating.

We don't see the huge flocks in the spring but the fall is another thing. The crows hang around for a month and feed for their migration south.

What an experience that must have been - it's just amazing how animals can figure out how to adapt their behavior to survive. That's a heck of a memory to have, Doug.

P. S. I approve of your exclamation mark decision :)

They really are, aren't they?

I didn't know that crows migrate - ours seem to be here all year round. But then, our weather is a bit more temperate than Alberta's. Ya learn something new every day. If you pay attention :)

Our ravens will do that from time to time, hundreds, even thousands. What a racket. We do not have crows here and I miss them. they were always the first sign of spring on the priaries

While living in a very small apartment in Macedonia I used to watch the birds go to roost. The sparrows would go first, into some crevasses in a stone building very close to our balcony and easy to see. They had a kind of a raven over there that was huge, black, with gray wings. They would roost next. Like our crows they were very loud birds. But as we would watch any number of different bird families would find their way to roost. They all went at similar times but each in their own time. Then, as the dark began to overcome the light, the bats would come out. Being in the city there was enough light remaining in the sky for us to watch them hunt.
Hey, I thought I was the only one crazy enough to watch birds going to roost and get excited about that.
:)

Thanks, that was a fun read.
Tom

These sights are always so fascinating. And moments like these sometimes stir memories, some of them, as you say, bittersweet.

Ah, kind of like our robins here. I love to watch the crows. They behave like people a lot of the time.

Wait, are we crazy? Or is everyone who doesn't like it crazy? :)

I'd fully enjoy what you described. Especially the bats, as I haven't see many of those. We used to have them at our cottage, but it was very dark there - no lights - so they couldn't be seen. Our region's bats have been decimated by disease so I don't know how many we would have now in any case.

We once had the chance to see chimney swallows roost in an unused chimney. They came by the hundreds and formed a vertical rotating column (like a little tornado) to enter the chimney for the night. It was amazing.

Nature is pretty amazing, isn't it?

That's a bittersweet memory, for sure. But like you said, at least your dad was still appreciating nature. Love the vid! It really gives a sense of the numbers, and you can even HEAR the birds.

Dad loved to be out in nature. That's one of the reasons his disability was so hard on him; it was so limiting. I'm glad the video helped to show the numbers of birds; that's all it was for, as it wasn't terribly good in a technical sense :)

Yes, they're just like a mob of people, aren't they!