Friday Round Up: The "Maybe It Was Art After All" Edition

When I posted last week about the peace signs and other things I saw in the cracks in the sidewalks and streets, I was just having fun with it.

But a few days later an email landed in my inbox from Colossal, a website dedicated to "Art, Design, and Visual Culture," and one of the highlighted articles in the email was a piece about some street artwork by Rachel Sussman, called Sidewalk Kintsukoroi. It is based on the Japanese art of kintsugi, described as "...the ancient technique that traditionally involves the process of fixing broken pottery with a lacquer dusted or mixed with powdered gold, resulting in an a repair that pays homage to the object’s history ..." -- except that Sussman used gold paint to fill in cracks in the streets. Actual gold, in actual streets. (That's not quite true; she used tree resin, bronze and gold dust. But really - gold dust?!)

Here are some of the pictures from the article: 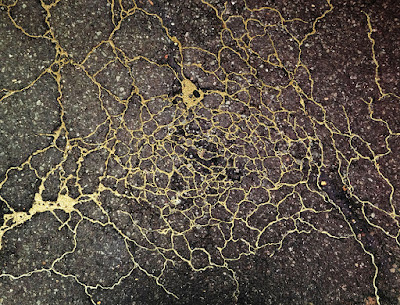 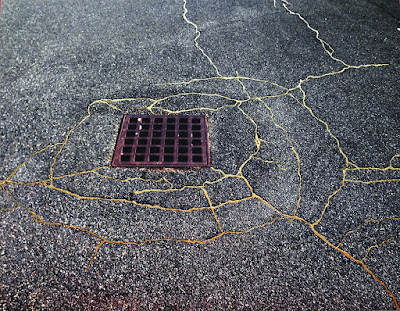 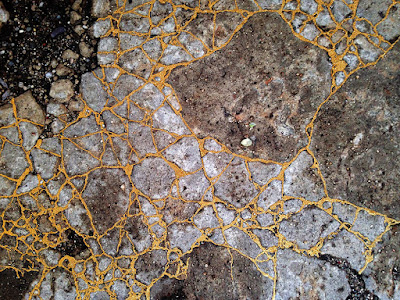 So, hey - now I don't feel quite so much like a silly ten year old for my "cracked" observations. However, I don't think I'll be running out to buy gold dust anytime soon to fill in the cracks in our streets.

Have you ever noticed how, after first hearing of an idea or a word or a term, it seems to pop up again and again? Like, for instance, how that email came to my attention right after my "art" post?

Some people call that coincidence; others attribute great meaning to it. I tend to believe that it's just that we don't notice stuff until it's already been planted in our heads somehow.

It turns out there's a name for that. It's called the Baader-Meinhof phenomenon, or alternatively "frequency illusion." You can read more about it here, if you're interested.

I love Google. That website is the first one that came up when I was looking for a quote I'd heard long ago that described what I was trying to say. I didn't find the quote I wanted, but I learned something new.

Aside from that, I've been reading about political stuff in the world. And reading. And reading. Some day my bottom will turn completely flat from sitting in this chair.

The latest article of interest that I read is this one by David Frum in The Atlantic. Fair warning: It's long. But if you are wondering what ordinary citizens can do to save U.S. democracy from potential serious harm under the current administration, he speaks to that at the very end of the article. (The Atlantic is described by Wikipedia as "a high-quality review organ with a moderate worldview" and David Frum is a senior editor for it, as well as a former speechwriter for President George W. Bush. Given his background, it's interesting to read his sobering thoughts on the current president.)

I've gotten out for a few walks, although I had to start slowly again because I missed some time during the snowstorm's aftermath. But I did get a few pictures I liked.

This is the ice breaking up on our tidal river: 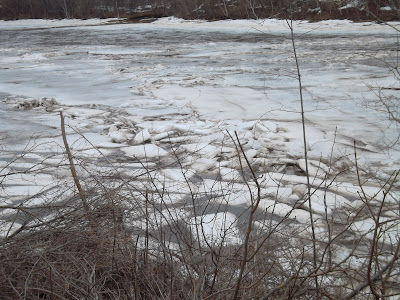 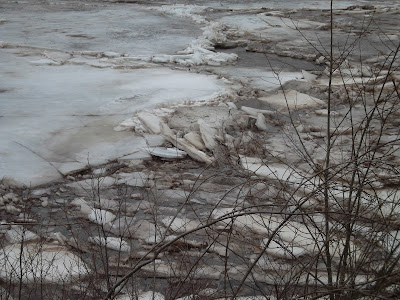 And I caught this crow in the edge of my shot, a happy accident: 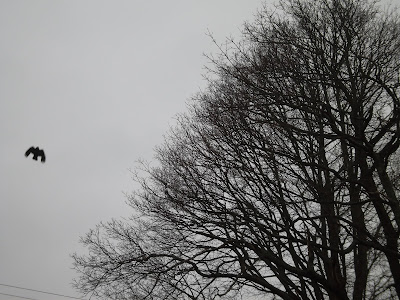 We had a cloudburst yesterday followed by an enormous, brilliant rainbow that looked as if it was just above the houses in the next street. It faded from view so quickly that I barely caught it with my camera before it disappeared, like a faint echo of a song: 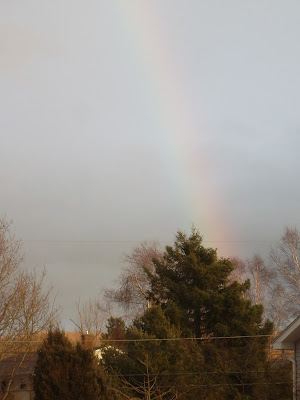 And that's it for this Friday.

If you made it to the end, thanks for reading!

Happy Weekend to all.

No gold dust in cracks for me either.
LOVE your images, and am very glad you are walking again.
The David Frum article makes for scary reading though. Very scary.

Yes I won't be rushing out to fill cracks in the streets with gold dust either, especially as a week later the council will come and dig up the street to lay new cables, and then a week later, someone else will re-dig it up to add new pipes etc. Bang goes the gold dust.

Same to you. Wonderful post. Love your photos and will read Frum's article later.

I love the gold dust idea! It's a great way to make something mundane, something we're unlikely to even notice, into beautiful public art. That's VERY cool.

Wasn't the Baader Meinhof a terrorist gang? Wonder what the connection is between the name of that syndrome and that group? I'll have to do some research myself!

I'll check out the Frum article when I have a chance.

In the fall our road crew inspects township roads and fills all those cracks with tar, against winter freeze and thawing. It seems Rachel got there first.

Baade-Meinhof???? No, it was the universe speaking to you. Love the rainbow shot.

And after it rains there's a rainbow...Simon & Garfunkel, My Little Town. I love your pictures, thanks for taking time to share them. That song jumped into my head after seeing the last one.
Have a great day...
Tom

I agree (re the article). And it feels so good to be able to walk pain-free - even though I have to be careful not to be out too long. I hope that part will improve soon.

Hah! Isn't that typical of local councils? A bit of long-range planning would help.

You're probably right about the temperature of that river. I prefer not to check!

Thanks, e. Don't read the article before trying to sleep, though. It won't help your insomnia a bit.

The article I linked to gives the likely explanation for the Baader-Meinhof name. I'm just impressed you've heard of the gang already!

Thanks, Tom - that's a great song and now I'll be humming it the rest of the day :)

Love the rainbow and the cracks.

If you want to know how to resist this government, the Indivisible Guide is excellent. It was put together by former congressional staffers who saw how the Republicans used the Tea Party and its tactics to successfully obstruct a popular president and friendly congress and turn the people against his agenda. The groups formed from its strategy were mostly responsible for the huge protests that sprang up so quickly in the wake of Trump's inauguration.
If you're interested, you can download it here:

My friend Jack used to make jewelry for a designer in Sausalito, and he taught the designer how to fix flaws in the gold rings with gold dust and superglue. Those pictures reminded me of them.

I enjoyed the link to Baader-Meinhof phenomenon.

Well that's a coincidence regarding kintsugi. I was watching a show called "The Man in the High Castle" and they had an episode that explained how this is part of the Japanese culture. Cool stuff.

I made it to the end! Now I forget what I read! I'm afraid American politics has kept our attention and worry for quite some time. I did hear an interview with David Frumm.

I feel there should be some connection between those, like maybe "cracks of gold" at the end of the rainbow instead of a pot of gold, or something, you know ...

Good to know - I will be checking out the Indivisible Guide for sure.

Gold dust and superglue, eh? I bet they never did that in ancient Japan :)

It was kind of fun, wasn't it? Especially the name of the website!

John, your comments aren't coming to my email the way everyone else's do, so I hope I'm not missing any. I can't figure out what the issue is. Just wanted you to know in case you thought I was failing to publish some of your comments.

No kidding? Very cool coincidence there!

I really like the idea of mending instead of throwing away like so many people do today. The Japanese also used the textile mending technique called boro (or sashiko for combination mending and embroidery)(I think I have that explained correctly). It's quite inspirational, I find.

Yes, even in Canada I think we would be wise to keep a close eye on what is happening south of the border. We are such close neighbours.

I actually made it to the end! With a cup of peppermint tea beside me. Go, me :)

I've been unplugged this week from the news and I feel like the cobwebs have cleared from my mind. Every time I start to surf the web, it's the U.S this and the U.S that. It's quite tiring. But since I like keeping up with what's going on, I imagine it won't be long before I'm bombarded again :)

Baader-Meinhof phenomenon. I like that! I never knew what it was called but I figured once we take an interest in something, we notice it more and more.

Have a great weekend!

Beautiful artwork. I love it. Too bad it cannot be framed, other than in photos.
The way they don't fill potholes in our town, you would swear asphalt was goold

gold dust is quite expensive here ,only for the artificial jewelry applying though not crack in the streets lol.
your shots are fabulous snow seems cracked now,may be snowing season is about to say goodbye now[hopefully].
loved the bare branches of trees with flying crow, quite artistic!

thank you so much for your concern for my absence for while due to net problem i am overwhelmed by it so much dear .
God Bless you!

Yes - Go, you! This was longer than I ever intended :) I'm starting to feel like I need to unplug for a week or so. The news has been anything but slow lately.

Last spring there was a Biggest Pothole Contest here. I am serious!

I love your writing - "snowing season is about to say goodbye" - it makes me see winter as more of a friend! I am glad you liked the picture of the tree branches with the crow. It was unplanned but it made me happy. Have a good week, baili!

Thanks jenny, I'll try to fix it somehow.

I can see that, yes!

I don't know if there's any way to fix it; I just didn't want you to feel neglected if your comment didn't show up here!

I love the idea of honouring an item's history by celebrating its cracks! I don't happen to have any gold dust handy, but it might be fun to try a similar technique with a filler that doesn't cost quite so much. :-)

Have you heard of sashiko? (I think you sew, right?) It's a Japanese mending slash embroidery technique that does the same thing but with fabric. I like the idea, too!

Yow! That gold in the street cracks just lifts them from the mundane to the miraculous! Hmmm . . . I wonder if it would work on my wrinkles . . .
I wish our ice was starting to break up. No dice yet.

On wrinkles ... why didn't I think of that? hee hee