The post I linked to on Friday, on Tim Urban's website Wait but Why, called "It's Going to be Okay," has been followed up with another post, HERE.

Tim acknowledges that he wrote his initial post quickly and without taking the time he usually does to let all the nuances of the election results seep into his brain.

If you read the original post, it would be worthwhile reading the follow up. In it, he addresses some of the points that turned out to have needed more thought, but I believe his central point is still valid and is the only way to move forward in any case where there is such division: no matter which way we vote or which "side" we are on, ALL of us need to try to learn why "the other side" voted the way they did. My Friday post was referring not just to the division in the United States, but also in Britain (the Brexit vote) and in my own community.

There has also been a new TED talk released since the American election that I found gave me some clues to how to move forward. That video is HERE, if you care to follow me down the rabbit hole of learning.

And now for a complete change of topic.

Every autumn, I've noticed that there seems to be one day when the leaves drift continuously from the trees. You could watch them drop for hours, if you had the time, and by day's end the trees are virtually bare.

That day happened here last week. We had frost the night before, and the cold snap may have been the trigger for the leaves to fall en masse. As I was filming them, our three deer wandered into the yard. I say "our" because they are the same three who visit us frequently - a doe and two smaller ones who we think may be her twins of last spring.

I hope you enjoy seeing the leaves fall around the deer as they graze, happily oblivious to me - who by the way was standing on the very cold deck in my sock feet.


And look who came to the front yard later in the day - the nearer deer was only a few feet from our front door, while the far one was in the neighbour's yard. They have very little fear, but after all, they did grow up in town. This is their home. They've never known a truly wild place. 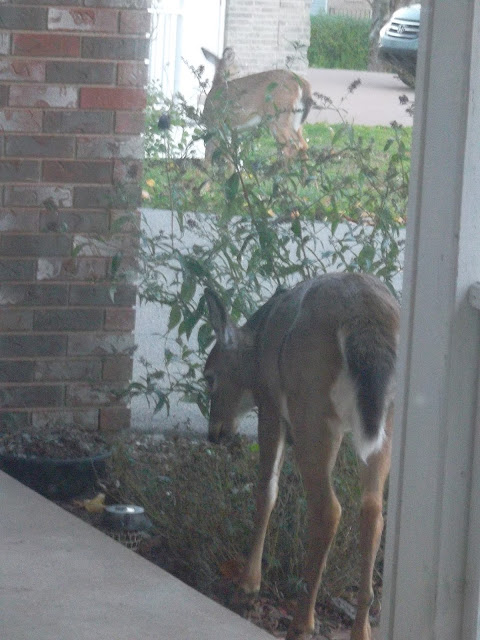 Until Friday ... be well, my friends.

A real deer coming to your door is pretty cool. We don't get that kind of attention over here. It gets cold at night though.

It's still a thrill, even though it happens often.

Terry, if you come back to read this, I'd like to point out that I made some changes to the post and added some more links after you left your comment, in case you're interested.

I hope that deer isn't eating your landscaping! :)

I'll read Tim's followup post. I do think we all have to move forward together somehow -- although at the moment I'm in the "Well, you asked for it!" stage.

All our leaves came down one day last week--in the wind.

I think she was eating the weeds IN the landscaping :)

Yeah, it's going to take awhile to move on. So much will depend on what Trump does now that he's actually got the job, but a lot of damage has already been done.

Yep, that'll do it too. Or the rain. I like the times when they drift down silently the best.

Loved your drifting leaves. And your deer. I am so grateful that you froze your tootsies to capture the moments for us.
And yes, I read that second post. Time will tell. I am cautiously hopeful. But wary.

I can't resist filming the deer, but the videos aren't really high quality. They are okay when viewed on my computer but in a post they are quite blurry. Ah well. Yes, wary is a word I find myself using about all of these situations. Hopeful and wary, as you are.

We don't get deer this far down the hills, but the occasional opossum, raccoon, or skunk wanders through the back yard from time to time.
I read the article. We do have to move forward as a people somehow, and we will whether we like it or not, so that's as good a reason as any to get involved in the process of it.
Some of us, however, will not be moving forward, as our health insurance is about to be taken away, and that does mean that some of us will die because of this. I'm just really glad that I had my cataract surgeries last year while the ACA was still in effect to help pay for them. Otherwise, I would be facing blindness as the condition of the rest of my life, and it really isn't any fun at all.

I hear you, Doug. I wonder if Trump will actually repeal Obamacare. He has been softening on some campaign promises already. It's frightening to face medical conditions with no way to access help. And can be deadly, as you point out.

Wow your deer are very tame. We also have a family of deer that come into our garden and now it looks like I may have to stand outside in the cold with just my socks on filming them. Okay, maybe not, I'll leave it to you.

Nah, keep your shoes on; I've got it covered, Joe. Until there's a foot of snow, anyway :)

Love those beautiful deer photos, PD. I didn't link to the TED talk yet but suspect it is the same one I posted to my FB page after the election. It helped me. Bruce Kasanoff also published a post today on LinkedIn that I found instructive, using Maslow to explain what happened. I'd link to it but I can't find the link:-)

I'll find it, never fear - thanks for the tip. I'm trying to read as much as I can on all of it.

Here it is - and what a great, easy to grasp article - thanks again, Chicken.
https://www.linkedin.com/pulse/dangerous-lack-empathy-prevails-bruce-kasanoff

The falling leaves
Drift by my window...

Have you named the deer, yet?

I can't even name our cats properly, Jono. All cats are called by Missy or Buddy. So, no, naming the deer will probably not happen.

On the other hand, maybe we need a deer-naming post. Hmm.

Oh, jenny-o.
The election has me sad,
but your deer cheered me so.
:)