50 Years And Nothing Has Changed

It seemed like a good idea at the time.

I mentioned in this post from a few weeks back that I'd noticed a sort of peace sign in the sidewalk cracks while out walking. At the time, I failed to get a photo, so I went back for one a few days later. 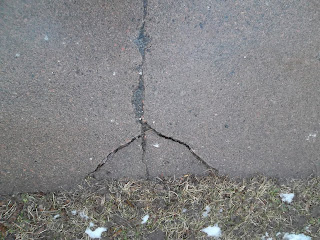 Along the way, I noticed a few more peace signs so I started taking pictures of those, too. 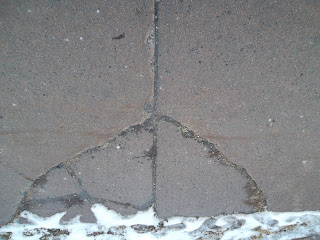 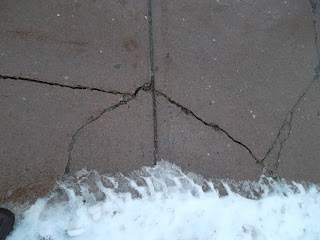 I don't know what people thought as they drove by, while I seemingly took pictures of my feet.

We suffer for our art, do we not?

Anyhow, the peace signs were not really complete because they had no circles surrounding the lines.

So my next thought was that, by Jove, I'd learn to use Paint to draw the circles on my photos. Usually I try to avoid voluntarily learning new technology, but I really wanted to do this, so I called an emergency meeting of my two brain cells and figured it out. 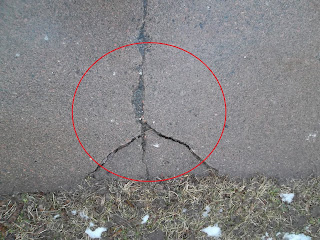 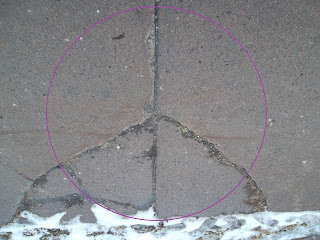 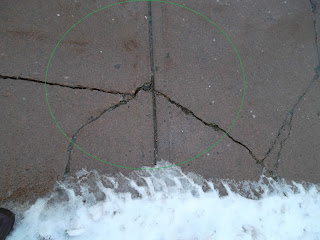 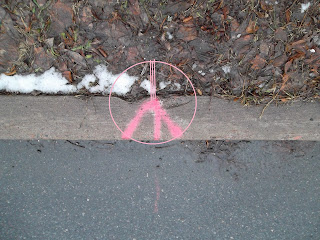 While looking for peace signs in the sidewalks, I had also started noticing patterns in the cracks in the streets as well, and found one that reminded me of the "Kilroy was here" pictures that we used to doodle on our binder covers in high school. 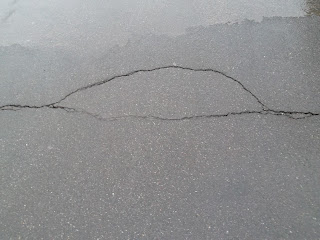 So then I used Paint to fill in the details of that sketch. 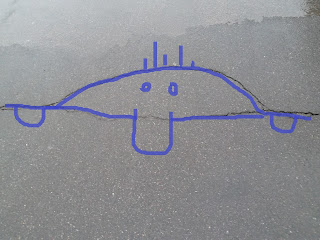 And THEN I noticed a place in the sidewalk that had a lot of random cracks in it that reminded me of one of the kinds of "art" our elementary teacher had us do. She called it a "Scribble Picture" and it's just like it sounds. You scribble randomly around the page, and then you fill in the various shapes formed by the lines with different colours.

Here is my inspiration piece from my little art book that I wrote about in this post:

And here is the sidewalk "scribble picture" without colouring: 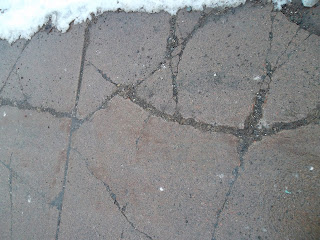 And this was where things started to go off the rails. I could not, for the life of me, figure out how to use the "fill" option in Paint to fill in those shapes. However, I'm a persistent donkey and I chose the "marker" option and began, laboriously, to colour in my sidewalk scribble picture using the mouse.

(No, I am not five years old. Or even ten. But I'm stubborn. And have too much time on my hands now and then.)

Now, I was not a good colourer in school. I could never do it neatly, nor consistently, nor within the lines. I couldn't see the point of it, I didn't enjoy doing it, and I was terrible at it.

Apparently nothing has changed in fifty years. Computer colouring is every bit as horrible and crazy-making as crayon colouring.

By the time I had that sucker finished, there was a cramp in my mousing hand, my left eye had started to twitch, my shoulders were somewhere north of my ears, and I had to resist a serious urge to fling both the mouse and the computer screen across the room.

But having done all that work, I couldn't NOT post the result here.

I think I actually prefer the one I did in elementary school.


Here is a link if you're interested in the background of the peace sign. Did you know, for instance, that it's based on the semaphore (flag signals) for the letters N and D - which stand for Nuclear Disarmament ... I had no idea before the article in that link popped up in my email.

And here's a link to a Wikipedia article on Kilroy -- who seems to be known as Foo in Australia and Mr. Chad (or Chad) in the United Kingdom.

Peace out, people. And if you know how to use the "fill" option in Paint, for a photograph, I'm all ears. As donkeys tend to be.

Well that's really cool to take cracks in the sidewalk and make them into an art project.

Ha! I love your eye and your creativity. I never would have noticed peace signs in those sidewalk cracks, but now that you point them out they seem so obvious. (Especially with the added circles!) And I think the scribble picture turned out really well! You did not suffer in vain! :)

You have been a busy bee collecting all those 'peace' signs. We could use a whole bunch of peace in this weary old world.

I was laughing hard as I went, thinking "she has too much time one her hands." Then I came to that line! Fortunately, the village sidewalks are sandstone. Their cracks are boring.

I want the link for how you learned to color on your computer. Very creative-I'm impressed!

At least I got a post from it :) And to be honest, it was a welcome change from reading about politics!

So true ... unfortunately all the peace signs in the world don't mean anything without the attitude to go along with it.

Ha ha! You NEED some concrete sidewalks, Joanne, admit it!

I just clicked on the photo to make it big, then clicked on "open" at the top of the page, which gives a drop down menu. One of the choices is "paint" and when you click on that, you get some choices at the top of the page. I just tried a bunch of stuff - you know, pretended to be six again :) I'm sure there are tutorials on using Paint on youtube somewhere, and I'm wondering why I didn't think of that for the problem I was having!

I, too, only have two brain cells. I used to have three, one for each of my favorite activities at the time, but the stroke took out the right one. Which is OK as I wasn't using it any more anyway...,

Excellent work. I love it. Glad to hear that you wanted to do something and you did it. You definitely can see your improvement from the first to the last. Take care.

I don't recall the exact quote (Oppenheim, I think) but will paraphrase: The wise seek happiness under their feet. I think sidewalk cracks qualify nicely, Jenny. Good post!

And I thought I was odd! Ha, joking. Very creative. You know creating circles and filling in areas of colour are really easy to do in photoshop elements?

Very creative, and humorous, too.

Some might say that art isn't all it's cracked up to be. Yet, you have displayed, very cleverly, that your art's in the right place.

You have a terrific blog and thanks. Now, before I make an ass of myself, I shall now go back to my blog....

As long as you have two, it's all good!

As a parent of elementary children, you know just how to encourage!

Thanks - I've never used photoshop so that didn't occur to me. I need to google it!

You do know that if I'm successful, there will be a follow-up post, right? :)

Welcome, Gary - thanks for visiting! You are the Master of Puns and Wordplay and I am honoured to have you here! Hope you and Penny have a good weekend :)

Art is everywhere around us, and now I will see it in the sidewalk cracks as well, thanks to you!

I can't stop seeing things in the walkways and streets now, but calling it art is being very generous :)

Thanks for the post! It just reminds me to see beauty in everything in our surroundings. We just need to take a pause and look hard.

HAHAHA! Yes, we do suffer for our art! You have a good eye for noticing those details. And you are very creative!

I like both pictures and neat about the peace signs. I like the bit about suffering for our art. You're funny.

Thank you for those kind words, Martha! I'm not sure it's creativity as much as just playing :)

you made me laugh! And now I will notice the cracks when I walk the kids to school tomorrow. Maybe we will take chalk along one of these days and actually doodle on the cracks as we walk by!!

And now I'm wishing I still had young kids so I could do this without attracting attention! I hope you have fun!