Today's memories were jump-started by this post from Delores, where she talks about helping her grandchildren learn to knit. As I commented to her, there's nothing as helpful as a hands-on demonstration of a new skill. Kudos to her for passing on her knowledge to some of the little people in her life.

My mother showed me how to sew on her treadle machine when I was quite little, and she provided me with knitting needles, crochet hooks, and other supplies to satisfy my crafting soul. She also let me bake on my own at an equally young age (probably seven or eight).

My father, an auto mechanic and fixer of all things with motors, allowed my brother and me to drive an old Jeep and an old VW Bug in the field next to our house when I was still so short I had to sit on a car parts catalogue to see over the steering wheel. (The catalogue was about four inches thick.) Dad also taught me to drive "for real" when I got my license a few years later and a few inches taller.

My grandfather showed me to chord on the piano so I could accompany his fiddle-playing, which I wrote about here. And although at the time I was as ungracious and ungrateful as only a teenager can be, I am glad to have that experience and treasure those memories now.

My grandfather's second wife gave me a hands-on demonstration of embroidery techniques, and the good advice to wash my hands before working on a project. I was a grubby eight-year-old and washing wouldn't have occurred to me without her input. The marriage to my grandad didn't last long, but I still remember her patient and kind help.

When I was twelve I took "plink, plank, plonk" piano lessons from a very nice teacher, but found them drearily dull. Then an accomplished musician moved to our community from the United States with his equally talented wife, they put down roots and had babies, and my mother babysat their children in return for piano lessons for me. Now that was a teacher who could motivate. He helped me learn numerous complicated pieces and I thank him to this day for understanding that I didn't need to become a concert pianist, I just needed to play something I loved.

That musician and his wife also formed a theatre group and a choral group in our little community, and his wife taught ballet classes. The amount of culture that they brought to my life, and the lives of many of my friends and neighbours, can't be overstated.

I am so thankful for all these adults in my childhood who helped me gain skills and self-esteem that have travelled with me throughout my life.

On a completely different topic: on one of my walks this week, I found a peace symbol formed by the cracks in the sidewalk. And I should have taken a picture of it, but I didn't because my fingers were freezing, and then we had more snow, and now it's all covered up.

Here's a Pixabay peace sign instead (which I could have made myself, if I'd been clever enough to think of it): 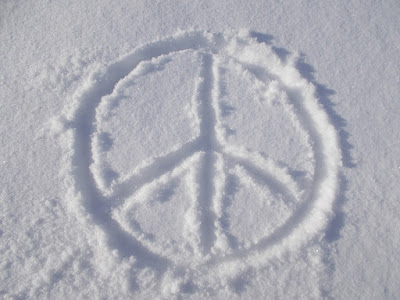 The next time I get the chance, I'll take a photo of that sidewalk crack peace symbol, and post it.

We can never have too many peace symbols, nor too much peace.

Never, ever too much peace. Or its close relative kindness. And her sister gratitude.
A lovely post. Thank you.

You are absolutely right and what a wonderful post and tribute to those who helped enlighten and broaden your horizons. I imagine you now enjoy doing the same for other youngsters.

There's something very wrong about knowing how to do something and not being willing to share the information.

You are right. We can never have too much peace.

As we get older, we remember all the people that taught us great skills that accompanied us throughout life. If only we'd been more grateful - and even attentive - in our younger years!

You are right, we can never have enough peace.

I love how you put that, EC. It's a great triad, isn't it? Thanks for your kind words. You exemplify all these qualities.

I did with my own kids and any who wanted to learn, and now the next generation is getting old enough to be the next victims!!

So true. And there's no shortage of people who share freely - just look at the how-to videos on youtube, the majority of them done purely to share knowledge.

Especially when times are unsettled, eh?

We can definitely can use some more peace these days. Great post, jenny_o. Thanks for sharing. Have a good weekend.

Your piano teacher story reminded me of Aaron O'Keefe, who started learning piano as a little kid to impress a girl, and now teaches the music kids actually want to play to them and has made some amazing videos of his students covering songs from bands such as Tool that now have millions of views on YouTube.

It's good to think back about the people who influenced your life.

I think it's a great way to get kids interested and keep them that way! The kids in the video I watched were amazing - talented and so composed. Thanks for the link.

I have no doubt you'll be scratching peace symbols in the snow, next opportunity. A feature of peace is its anonymous propagation.

I love the thought of peace anonymously propagating, Geo.! I will do my bit to help :)

What a wonderful post! You have so many talented people who influenced and enriched your life.

Thank you - and you're right; I was lucky!

I love that people are still sharing their skills and gifts with one another. This is the good stuff.

And everybody has a gift they can share; that's another bit of good stuff!