Since my post last week about bird visitors to our new, very small bird feeder, I've had lots of chances to try to get some better photos of them, and even a video. No, I didn't find my camera instructions. I just winged it. (Pun not noticed until re-reading!)

I found that I could get my camera to focus on the birds rather than the window screen if I made sure the outside object was in the centre of the picture. Now I have a convenient reason to procrastinate some more on looking for that darn instruction booklet.

As mentioned in that other post, there are two groups of birds who dominate the feeder. I'm fairly sure they are just common starlings and blackbirds. Both of these birds are plentiful here and you'd think I would have known what they were. As it turns out, in the case of the starlings, I was seeing lots of what I thought were new-to-me birds but they were actually just young versions of what I know as starlings. They are covered with light spots -- quite fetching, really. I am used to seeing plainer, darker starlings.

I borrowed this photo from Wikipedia, because my starlings wouldn't sit still. But my guys look a lot like this - black base coat, spots, yellow swords for beaks, and pinky-orange legs. 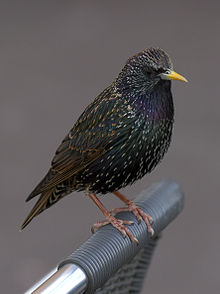 And the blackbirds? I'd never seen them up close before. Turns out they are't black, as I had thought, but irridescent, with dark blue heads and greenish backs. Their eyes are piercing yellow, and kind of give me the creeps. Their grey beaks are strong and pointy. 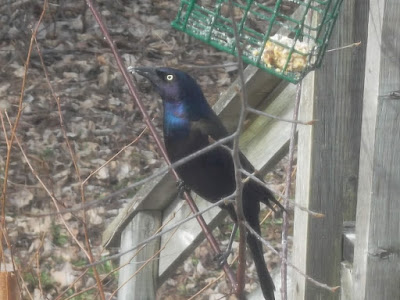 We also have some little yellow finches in our back yard. The males are bright yellow and the females are more of a yellow-grey. The day I took this shot, there were seven of them in one tree -- one male and, apparently, his harem. You're going to want to enlarge this one, and even then you might have trouble picking out the birds, they are so tiny and blend in (except for the male). (You can click on the photo to enlarge, or you can enlarge your whole screen by pressing Control and "+" until you get to a size that works for you.)

There are several chickadees who also come to the feeder, usually when the bigger birds aren't around. I love to see them and hear their distinctive call. It makes me feel smart to be able to identify one bird and its song beyond a doubt.

Here is one little fellow who arrived when there was nothing left in the feeder but the smell. Don't worry, I filled it again right after taking the photo.

I also managed to get a video of some of the starlings and blackbirds at the feeder, from our upstairs window. It wasn't quite the mayhem we had last week; are they learning manners, I wonder? or maybe not quite as starving as a week ago? And yeah, you can see all the bird poop on the deck and railings. I've had work deadlines, so for now we still have a "poop deck" although not in the usual meaning of that phrase.

And here is a blackbird talking while eating. Tsk. They have an easily identified squawk, as you'll hear at the end.


And while not bird-related, I will leave you with this shot. These deer seem to be the same mama and two babies that came to -- and through -- our yard last year, but the babies are big now. Here they are in our back neighbour's yard. It wasn't until I uploaded the photos and looked at the closeup that I saw what one deer had been looking at so intently through the window. See the white blob in the left window pane? If you enlarge the photo you may be able to see that it's a cat. The deer watched the cat (and the cat, I presume, watched the deer) for quite some time before the deer moved off on their morning rounds.


That's it for another Friday. Let's hope our vision isn't as blurry as some of these wildlife photos. Wouldn't it be cool if we could just "Control/+" in real life to see things better? I'd buy one of those.

Have a good weekend!

I would definitely buy a Control + gizmo. And also a Control -. I can think of as many things I would like to shrink as those to embiggen.
Love your birds (incontinent though they are) AND the deer. Sadly experience tells me that the birds consume superglue or its equivalent as well as seed. Their leavings are sometimes very, very resistant to removal.

Oh dear, I'm not liking the sound of that ... probably it's a good thing we don't spend much time out there. As soon as the bug supply is established I'll be taking the feeder down, and maybe the rain and sun will help get rid of the splotches.

Control "-" YES I could do with one of those too!

Have you tried to take the photos not through the glass? Maybe quietly open the window? The glass, especially when you zoom in will always make everything look a lot more blurry.

That yellow Finch is amazing.

Starlings are actually very pretty when you see them lit up in the sun, with their speckles and irridescence. They're crazy birds, too. They really squabble at our feeder. I love the yellow finches!

Lovely to see nature in the back yard. And yeah....I'd buy one of those as well.

Now that makes sense - I'll give it a try. Thanks for the tip! I love the finches, maybe because they're not so common. And we can only see them this time of year, as they blend in so well once the leaves come out.

Yes - what I always thought of as drab little brown or black birds are different up close!

A person can get pulled in pretty fast, it seems! I have a lot to learn.

I thought the deer was watching people in the house, so it was fun to enlarge the shot and see the cat instead!

The Little Brown Bird Brigade hasn't shown up in the back yard yet this year, but the milkweed has come back and yesterday I saw a monarch butterfly back there.
I wish the LBBB would hurry, as the crane flies have hatched and are everywhere now.
I love the deer and cat picture, and I tried to show it to the cat, but she wasn't interested.

Great shots of the deer. They are fun. Funny how the bird rocked as he ate.

Just goes to show there isn't really such a thing as a drab bird or deer. The deer always make me think of Bambi, the first film that gave me nightmares, although in real life they are beautiful creatures. Have a good weekend.

What would we do without birds? We'd be overrun with bugs!! As long as they leave the monarch butterflies alone, it's good. I haven't seen a Monarch in years, which is sad.

And I'm glad your yard is a good place for them to stop.

Yes, he reminded me of a kid on a swing!!

You're right; we just need to see them up closer.

One of my early memories is my older brother reading Bambi to me and me crying my eyes out. My mother remembers it, too.

Diane Henders - Sorry, I did something backwards and lost your original comment!! Here it is from my email moderation:

"What birdy fun! Goldfinches are one of my favourite birds! Your blackbird is actually a grackle, though: https://www.google.ca/?gfe_rd=cr&ei=wPYuVcTTGuyM8QfGq4CABw&gws_rd=ssl#q=grackle - that explains his/her noisy squawks. Blackbirds are usually a little more melodious.

I went back and forth trying to decide if this bird is a grackle or a Brewer's blackbird. I finally went with blackbird because they are slightly smaller than grackles and also because of the two songs I was comparing - ours sounded more like the blackbird. Here's the online site I used - the grackle first:
https://www.allaboutbirds.org/guide/Common_Grackle/id
... and now the Brewer's blackbird:
https://www.allaboutbirds.org/guide/Brewers_Blackbird/id

What do you think? I'm new at this and can use all the help I can get! Why can't those %&*$ birds have more distinguishing features?!

LOL! Typical birder's dilemma - I've spent far too much time studying bird books only to conclude at last that I've discovered an entirely new species, because NONE of the birds in the book look like the one I saw.

Brewer's blackbirds and grackles do look amazingly similar - sneaky little buggers! I'd still be inclined to say yours is a grackle, though - they have longer tails and slimmer, longer bodies; whereas the blackbirds have shorter tails and rounder bodies. But it could just be the camera angle. Maybe your Brewer's blackbird has been working out lately and chose to show off his/her new streamlined physique! ;-)

Lots of activity over at your place! "If you feed them, they will come" :)

Starlings and blackbirds are pretty dominate around the feeders. Blue Jays, too, if they come around. I do favour the little finches, especially when the males don their bright yellow outfits in the spring to impress the ladies...mating season! Makes me think of my teenage years in the late 70s and early 80s when we went to the disco and the guys would wear all those flamboyant outfits. Seems silly now but it was fun back then.

I had a good laugh where you wrote "one male and, apparently, his harem" :) A real popular fellow, it seems.

Hah! Now I'll think of disco when I see those finches! I don't know why there was one male and six females. (I'm assuming they were ladies.) Maybe the other fellas were out playing golf ...?

Hahaha. I can see that.